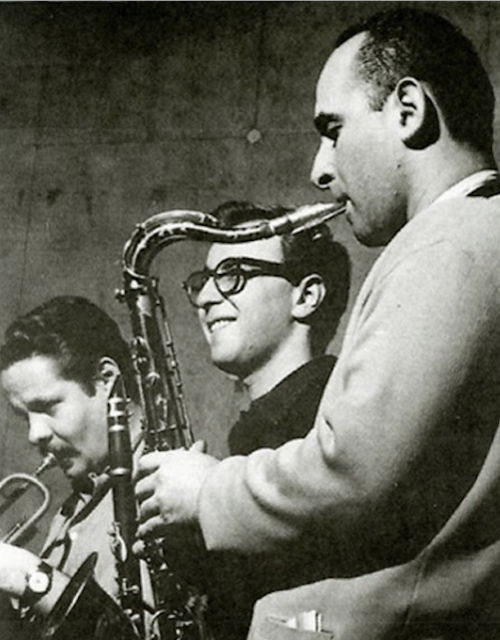 slideshow
The fact that the name Dave Schildkraut doesn't always ring bells among the jazz cognoscenti constitutes one of the sad realities of jazz history. He appeared with a flourish on a Miles Davis Prestige session, Solar (on alto), in 1954. He played with some notables before and after that, and appeared as sideman on a few other records, but mostly was lost in a haze of obscurity. To me he epitomizes the “falling off the face of the earth" syndrome. What happened? There are reasons. He apparently turned down some key opportunities, to record for Norman Granz, etc. Why that was I do not know. I only know that on the basis of the Miles session I knew from the first hearing that this was a very promising, even important saxophonist. Over the years I was only able to track down one old LP, a private recording where he was playing in a pickup group for one of the sides. It was a poor recording and didn't do justice to Dave's playing.

I recently found out through the kindness of saxophonist/author Allen Lowe that there was something else. Dave recorded in a New Haven club in 1979, right before he retired. In fact Allen was the man who ran a tape recorder to capture the gig. And the CD has apparantly been out since 2000. Last Date (Endgame 005) ironically, is also the only (real) date of Schildkraut as a leader.

With the proviso that “last" is not least, I was very happy when Allen was kind enough to send me a copy. And listening to it for a number of times now, I am not disappointed in what is on there. It's a home tape recorder that captures the extended set and the balance is not entirely perfect. But Dave comes through loud and clear, on tenor and alto, sounding a bit more evolved than what he did in 1954, occasionally faltering a little in his phrasing, but also unleashing torrents of bop/post-bop phrasing that show a sound his own and a sense of timing and line weaving that fully justifies the legend that he is in some circles. It's not a perfect recording; he is not perfect on that last date; the band is OK but doesn't stand out, though pianist Bill Triglia gets some decent solo time.

It is Dave playing bop standards and songbook standards in ways that suggest he of course had internalized Bird, and had some relation in his playing to early Trane and the Tristano saxophonists (Konitz, Marsh). But really he falls from the sax tree to a place of his own. Since we don't have a lot of documentation of his playing this CD becomes an indispensible record for all who would seek to dig him. He was good. VERY good. Original? Sounds that way to me. Listen!