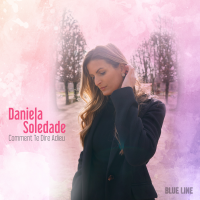 Riding high on the success of her debut album, 2019’s A Moment of You, vocalist Daniela Soledade has just released a new single and video. “Comment Te Dire Adieu” (“How Do I Tell You Goodbye”) with lyrics by Serge Gainsbourg, highlights the writer’s inimitable word play and finesse. In 1968 pop icon Francoise Hardy recorded it and it eventually reached #3 on the French charts. In homage to the song’s French roots, Soledade traveled to Paris to shoot a video for the song, which was itself recorded in producer and guitarist Nate Najar’s Florida studio. Before she entered the studio, however, Soledade had to learn to speak French—until the duo chose “Comment Te Dire Adieu” as an interim single between album releases, she had never spoken a word of French in her life.

“Comment Te Dire Adieu” is the quintessential breakup song. I have always wanted to sing in French and having recently gone through a major breakup, when the opportunity to do this recording came up, this was the most apropos song for me to sing," says Soledade.

Soledade’s debut album, A Moment of You, offered up a carefully curated set of Bossa Nova gems and received considerable critical acclaim. Downbeat praised the “pristine clarity of her vocals,” and All About Jazz called the album an “exquisite and heartfelt performance.” JW Vibe called the album “intimate, tenderly inviting and exquisitely produced and arranged.”