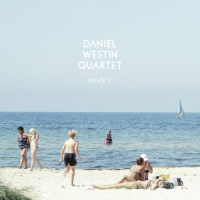 The Daniel Stahre Quartet released their debut album Notes at the Swedish record label Strangers Candy in May 2015 and has since reached out to international blogs, newspapers as well as domestic media. In the autumn of 2015 the album was among the most played jazz albums on national Danish jazz radio, DR P8 Jazz.

Notes was recorded and produced by the producer Åke Linton (of Esbjorn Svensson Trio fame) at Svenska Grammofonstudion in Sweden.

British web magazine We Plug Good Music wrote “their melodic Scandinavia-symbolic instrumental jazz could be the next saviours. Daniel Westin Quartet excels at showing what instrumental music does best." —Matt Hobbs, May 2015

Swedish domestic newspaper Arbetarbladet, wrote “Beautiful and full of integrity. There is a timeless and mysterious melancholy that allows the mind to sway, and makes you reminiscent of a Swedish tradition with artists such as Bo Hansson, Björn J:son Lindh and Dungen." —Emelie Lundin, May 2015

Swedish domestic newspaper Dalarnas Tidning wrote, “The album Notes produced by Åke Linton, famous for previously working with Esbjörn Svensson Trio, is a pleasant sonic experience. The niche that Daniel Westin Quartet lay out is a distinctive musical minimalism which is closer to meditation music and pop rather than jazz. As for me, the idyllic tracks Notes and The Train on the Meadow has become real favourites." —Lennart Cromnow, May 2015

Have a listen to the song Hymn below on Soundcloud!

Taking classical piano lessons until the age of 21, Daniel aimed for the classical scene. As a teenager he explored blues and jazz as well as playing pop music with friends in different bands. “I realised I had too many ideas of my own—composing seemed more fun to me rather than continuing down a classical path.”

The music on the debut album release Notes is to some extent a result of my reflections on urban life and the process of it. The album was recorded at Svenska Grammofonstudion in Gothenburg, Sweden by Åke Linton (Esbjorn Svensson Trio).