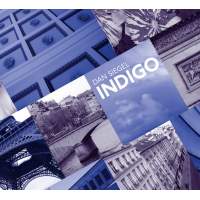 Released Tuesday, the keyboardist-composer’s 20th album is No. 1 most-added at CMJ Jazz

Irvine, CA: It’s been five years since Dan Siegel released a new recording and the cover of his 20th disc, “Indigo,” which was released Tuesday (Dec. 9) on the DSM label, provides a glimpse of the musical content. Stylish black & white photos shot by Siegel in Paris, Berkeley, Malibu and Irvine colored in muted shades of indigo reflect the melodic beauty and idyllic romance that illuminate Siegel’s ten original compositions that are fully-orchestrated acoustic jazz renderings produced by Grammy-nominated bassist Brian Bromberg and Siegel. Already welcomed to the playlist of 26 jazz radio outlets across the U.S., including a bunch of major market stations from coast to coast, “Indigo” was the No. 1 most-added album last week on the CMJ Jazz chart.

Siegel took his time developing the well-crafted material that comprises “Indigo” primarily because he splits his energies between being an accomplished artist and a passionate educator who teaches at MiraCosta College in Oceanside, California. Spreading out the recording sessions while meticulously honing his resonant compositions and imaginative arrangements proved to benefit the sprawling pieces and visceral melodies that are arguably the most fully realized in Siegel’s 35-year recording career that is renowned for sophisticated contemporary jazz offerings. Anchored by the proficient rhythm section formed by Bromberg (acoustic bass), drummer Will Kennedy (Yellowjackets) and percussionist Lenny Castro, Siegel’s expressive piano and cunning keyboards share the limelight on the harmonic explorations with stirring instrumental statements scholarly tendered by saxophonist Bob Sheppard, guitarists Allen Hinds and Mike Miller, and vibraphonist Craig Fundyga. Multi-layering brass section parts on a half-dozen tracks organically texturize the soundscapes while contributing depth, warmth and emotion.

Making the point that “Indigo” is a jazz record and not a smooth jazz session even though it will also appeal to that crowd, The Smooth Jazz Ride labeled it “a well-produced exercise in the wonderment of jazz.” AXS declared, “Dan Siegel’s ingenuity is fascinating to hear and the music on ‘Indigo’ shows his musical growth that has graduated to heights which other contemporary jazz keyboardists have not attained.” Exclusive Magazine concluded, “Simply put, ‘Indigo’ is yet another resoundingly beautiful work of Dan Siegel art!”

Last month, Siegel previewed “Indigo” for an enraptured audience with a performance at Spaghettini in Seal Beach, California. The Eugene, Oregon native is planning his return to the Northwest to showcase the album on tour next spring. Concert dates will be announced.