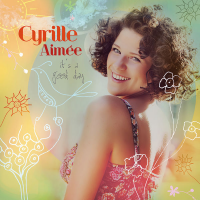 slideshow
It's A Good Day is the major label debut by the widely acclaimed young jazz singer Cyrille Aimée—yet another step forward for the rapidly rising vocalist. Winner of both the Montreux Jazz Festival’s Vocal Competition and the Sarah Vaughan International Vocal Competition, Aimée explores a range of musical styles, eras, continents and moods on It's A Good Day (Mack Avenue) with a singular voice on inventive arrangements.

Aimée’s musical outlook is reflected in an emphasis on the guitar, an instrument with an indigenous form in nearly every culture of the world—and it was the sound of the gypsy guitar that inspired Aimée to become a musician. While growing up in Samois-sur-Seine, Aimée snuck out of her home to the nearby gypsy encampments and was mesmerized by the music of those who followed the spirit of Django Reinhardt, revered as one of the world’s most influential guitarists. Aimée—who as a child also lived in Paris, Cameroon, Singapore and the Dominican Republic—later became fascinated with Brazilian guitar, and her music reveals a thorough understanding of bossa nova and samba idioms. She has now settled in Brooklyn, where she continues to absorb the inner workings of American jazz and the culture of the music's homeland.

The musical accompaniment on It's A Good Day is as novel as Aimée herself: three guitars (Jazz, Gypsy and Brazilian) with bass and drums. This captivating multi-guitar sound is provided by her close collaborator, Michael Valeanu, a player of French and Italian extraction on a contemporary jazz-style electric guitar; her countryman Adrien Moignard on the steel-string guitar gypsies favor due to its piercing, staccato sound; and the Brazilian guitarist Guilherme Monteiro, who relies on a nylon-stringed instrument which provides the bossa nova its soft and undulating sensuous sound.

Thoughtful arrangements of the thirteen songs—both standards and originals—ensure a sumptuous musical blend. “We worked hard to create a road map for each guitar to make the sound beautiful and exciting—without creating a musical traffic jam,” explains Aimée. The flexible and fluid rhythm section of bassist Sam Anning and drummer Rajiv Jayaweera holds it all together.

Opening the album are two standards, an engaging version of Rodgers and Hart’s “Where Or When," and the upbeat title track, “It’s A Good Day,” made famous by Peggy Lee. “Bamboo Shoots,” an alluring original by Anning, somehow manages to sound gypsy, Hawaiian and pop—all at the same time. In the same vein, her arrangement of “Love Me Or Leave Me” has an original multi-cultural spin. “I was inspired to do a version of 'Love Me Or Leave Me' after hearing Nina Simone's recording,” recalls Aimée, “and then I found the Billie Holiday version, and was further inspired.”

Seamlessly added to the mix are covers of Michael Jackson’s “Off The Wall” and Duke Ellington’s “Caravan.” “Caravan was one of the first songs I ever learned,” says Aimée, “and it was time to inject some fiery gypsy soul into it.” That frame of mind found it to “Pourtant,” a French pop song that was a hit for Vanessa Paradis, as well as “All Love,” which began as an instrumental composition by the late guitarist Babik Reinhardt, the son of the legendary Django. “I heard this beautiful melody so many times, but when they played it at Babik’s funeral, I asked for permission to put a lyric to it.”

It's A Good Day Day also features catchy original compositions by Aimée. Featured are “One Way Ticket”—the result of a trip to India, “Twenty-Eight” and “Nuit Blanche" ("White Night”), a French expression that refers to an inability to sleep while brooding over lost love. Oscar Pettiford's “Tricotism" is the zesty closer—almost an encore. How better to feature bassist Anning than in a jazz classic by one of the founding fathers of the modern jazz bass?

Cyrille Aimée is an artist of many facets. Infused by a novel blend of multicultural influences, a vision for a unique sound and with a voice that is sublime, It's A Good Day makes for a great day for a wide array of lovers of music.

Vocalist Cyrille Aimée was primarily raised in France by a French father and Dominican mother. As a child she snuck out of her bedroom window on summer nights wandering into nearby gypsy encampments filled with those attending the annual Django Reinhardt Festival in Samois-sur-Seine. She quickly fell in love with their music and way of life, and was captivated to the point of traveling throughout Europe where she and her musician friends would play and sing on street corners across the continent. This tour eventually led her to the Montreux Jazz Festival, where she won first prize in their vocal competition— which included the financing of her first self-produced album. Aimée auditioned for the French version of American Idol, for which she was selected to be a finalist. Informed she would have to sing only what she was told, her gypsy and jazz spirit rebelled—she left the competition. She now happily tours the world with her band as well as in a duo setting with Brazilian guitarist Diego Figueiredo. Aimée’s talents recently caught the attention of Stephen Sondheim who cast her in an Encores! Special Event at New York City's City Center in November 2013. It's A Good Day, Aimée’s major label debut, will be released in August 2014 on Mack Avenue Records.