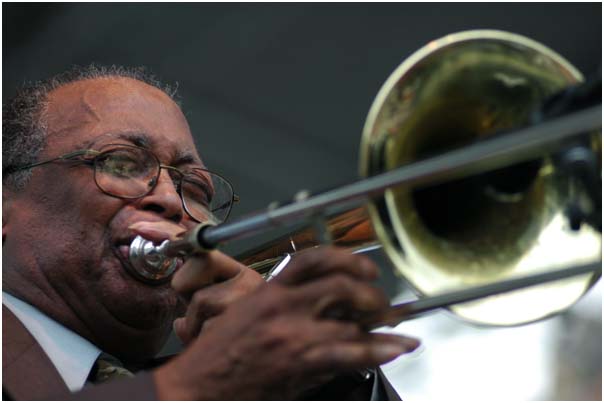 slideshow
While on vacation last week, I had the pleasure of catching legendary hard bop trombonist Curtis Fuller at Andy's Jazz Club in Chicago on September 16. Andy's, just north of the Loop, was founded in 1951 by Andy Rizzuto and it is still one of the best places to hear jazz in Chicago, every day of the week. My friend Tim and I were sitting at a table literally abutting the front of the stage, with Fuller and his quintet playing a few feet in front of us.

Trombonists rarely become famous, as they are not frequently leaders on recording sessions. Curtis, born in 1934, is one of a handful of recognized trombonists in the jazz world and is still going strong. He was born in Detroit and orphaned at a young age. Growing up, he was friends with fellow Detroit musicians Paul Chambers and Donald Byrd. During a stint in the Army in the early 1950s, he played in a band with Nat and Cannonball Adderley. He then was a member of Yusef Lateef's quintet, made the move from Detroit to New York, and began recording.

Influenced by J.J. Johnson, among others, Fuller was (and is) known for the lovely sonority of his trombone playing as well as his dexterity and speed. And it seems that 1957 was his breakout year, during which he recorded with a who's who of jazz greats: Sonny Clark (Dial S for Sonny), John Coltrane (Blue Train), Clifford Jordan (Cliff Jordan), and Bud Powell (Bud! The Amazing Bud Powell, Volume 3). Listeners were impressed with this newcomer to the scene, as were his fellow musicians. As Bud Powell exclaimed, “Man, that cat can blow!" He also recorded as a leader that year on New Trombone (with Red Garland) and on my personal favorite of his albums, The Opener.

Clearly, he was busy. Fuller continued to record prolifically over the next five years, including stints with Art Blakey's Jazz Messengers and the Art Farmer/Benny Golson Jazztet, as well as under his own leadership on Blues-Ette (1959) and Soul Trombone (1961). Later in the 1960s, he played with the big bands of Dizzy Gillespie and Count Basie. Recordings became less frequent in later decades, but he is still heading to the studio, with his latest album being 2005's Keep It Simple.

Fuller was clearly enjoying himself at Andy's, his playing energized by his young rhythm section and the trumpet of Pharez Whitted. Fuller had some terrific solos on the slower ballads and nimble plunging on the fast numbers such as Oscar Pettiford's “Oscarlypso“ (also called “Oscalypso"; from The Opener). Catch this living legend in action if you get the chance.