Crooner Russ Lorenson’s “in The Holiday Spirit”, A New And Swingin’ Classic Christmas Album, To Be Released November 6

As an album that harkens back to the days of Sinatra, Martin, Bennett, and Crosby, In The Holiday Spirit will fit comfortably next to the classic Christmas albums of the past, and is destined to become a classic in its own right. 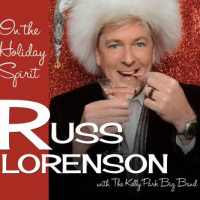 slideshow
Russ Lorenson, often called “San Francisco’s Favorite Crooner,” is releasing In The Holiday Spirit, which teams his warm voice with The Kelly Park Big Band. The new CD balances swinging “up” tunes with tender ballads, while consistently emphasizing the joy and fun of the holiday season.

If you grew up listening to the Christmas albums of the classic crooners—Sinatra, Dino, Tony Bennett—no doubt you still pull out those holiday albums every year. And, at least once as you listen to those timeless classics, the thought that “they just don't make 'em like they used to" crosses your mind. While Mr. Bennett is still going strong, even gracing us with new holiday recordings from time to time, you have to look a little harder to find that, yes, every once in a while, someone makes 'em like they used to.

Russ Lorenson’s In The Holiday Spirit is a new classic that is reminiscent of that timeless style, but with a twist. While most new Christmas records feature the same 20 or so chestnuts that fill the commercial airwaves each holiday season, In The Holiday Spirit showcases songs that are obscure yet superior, memorable yet rarely-performed. Nearly all of the tunes will be new to most of today’s listeners, yet are sung in a vintage retro fashion that is quite infectious.

In The Holiday Spirit has been awarded four stars by the editors of Downbeat and will be included in the magazine’s prestigious “Best Albums of 2015” list. Already playing to great response on the web’s most popular Internet Christmas radio stations, the album is sure to be just as popular with listeners of terrestrial radio.

In The Holiday Spirit begins with “Shake Hands With Santa Claus”, an enthusiastic and catchy tribute to the jolly old gent first made popular by Louis Prima in the 1950s. “Holiday For Two,” a 2010 tune written by Bob Malone & Jonny Blu, suggests an intimate, yet exuberant, celebration, For the romantics, John Pizzarelli’s touching ballad “Let’s Share Christmas,” is followed by Steve Lawrence’s “Let Me Be The First To Wish You Merry Christmas.” The infectious “Jingles, The Christmas Cat” reveals a mischievous character ripe for his own holiday TV special.

Among the many other highlights is the new Kelly Park swing arrangement of a Bing Crosby ballad, the exuberant “You’re All I Want For Christmas” which features the rollicking big band. A new song by San Francisco composers Candace Forrest & Nancy Schimmel is a rare tribute song to the woman who always has to spend Christmas Eve alone, “Mrs. Claus.” Other classic selections include Aretha Franklin’s happy homage to the joys of “Kissin’ By The Mistletoe,” Julie London’s “Warm In December,” Dean Martin’s bluish hit “The Christmas Blues,” and the quietly stirring “A Winter Romance.” From the contemporary songbook we hear a second John Pizzarelli tune, “Santa Claus Is Near,” and “It’ll Be Christmas Before You Know It,” by Paul Rolnick & Henry Cory. The album wraps up perfectly with the celebratory “It’s Christmas Time All Over The World” first recorded by Sammy Davis, Jr., and on which Russ teams with the Grammy-nominated San Francisco Boys Chorus.

Throughout In The Holiday Spirit, Russ Lorenson is heard in peak form. As the editors of Downbeat say, “The San Franciscan possesses a warm, rhythmically confident voice that holds volumes of Noël exhilaration. A showman of taste and discretion, Lorenson admires Bobby Darin, Frank Sinatra and Dean Martin without imitating them or adopting a Rat Pack smugness.”

Over the past 10 years Russ Lorenson has established a reputation as a leading interpreter of jazz standards, with a sound and approach that place him at the intersection of Broadway, jazz, and pop – the very essence of the Great American Songbook.  He not only performs the familiar standards but delights in uncovering forgotten classics from the past and discovering newer songs that are of the same high quality. Best known for his critically-acclaimed tributes to Tony Bennett and Bobby Darin, his one-man celebrations of the lives and music of these two musical icons have played to sold-out audiences across North America. His two previous CDs (including his 2006 holiday release, What I Want For Christmas) have received extensive radio airplay in major markets across the US. Jazz Review said that “Lorenson is not just a crooner covering the traditional Sinatra style or trying to be the next Connick; he is his own man.”

As an album that harkens back to the days of Sinatra, Martin, Bennett, and Crosby, In The Holiday Spirit will fit comfortably next to the classic Christmas albums of the past and is destined to become a classic in its own right.

Russ Lorenson is available for interviews, and review copies of In The Holiday Spirit are available through RL Productions at (415) 674-3863. Please contact George Russell to arrange.

More information about Russ Lorenson and In The Holiday Spirit can be found at russlorenson.com.