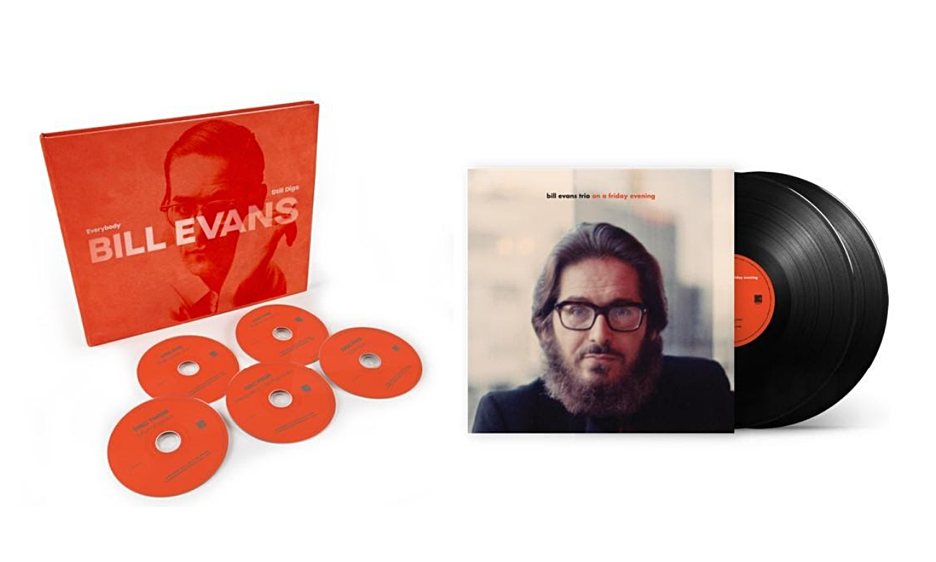 Craft Recordings proudly honors the pioneering jazz artist Bill Evans and his enduring musical contributions, with two new titles. The first—a deluxe, five-CD box set and digital album, titled Everybody Still Digs Bill Evans: A Career Retrospective (1956–1980)—marks the first-ever career-spanning collection of music from the pianist, featuring over 60 tracks that spotlight Evans’ exceptional work as a leader and co-leader. The expansive set also includes a previously unreleased live performance from 1975, captured at Oil Can Harry’s in Vancouver, B.C. This recently unearthed concert recording will also be issued as a standalone album, titled On a Friday Evening, which will be available on 2-LP, CD and digital formats, including hi-res 192/24 and 96/24. Both titles will be released June 25th and are available for pre-order today, with the previously unheard live track “Up with the Lark” available for immediate download as an instant grat. single. Special bundles featuring a new Bill Evans T-shirt and mug are also available exclusively at the Craft Recordings online store.

The majority of the box set’s musical selections are culled from Evans’ trios, with whom he released over 40 albums. Discs one and two offer highlights from those recordings, with the first disc spotlighting his Riverside sessions and spanning Evans’ earliest days working with Philly Joe Jones, Teddy Kotick, Paul Chambers, and Sam Jones, to solidifying a group with drummer Paul Motian and bassist Scott LaFaro, who died tragically in 1961, to the post-LaFaro trios featuring Motian, Chuck Israels, and Larry Bunker. The second disc focuses on Evans’ trio recordings from the mid-’60s onwards, collaborating with sidemen like Eddie Gomez, Marty Morell, Eliot Zigmund, Gary Peacock, Jack DeJohnette, Joe LaBarbera, and Marc Johnson.

Evans’ many solo recordings were also an important aspect of his career, garnering him two of his seven GRAMMY Awards (for 1963’s Conversations with Myself and 1968’s Alone). Disc three of the collection spotlights the pianist’s performances unaccompanied by others (some are truly “solo” while others feature Evans accompanying himself by way of overdubbing), including some of his seminal works like “Peace Piece” and “N.Y.C.'s No Lark,” as well as his musical composition to his son, “Letter to Evan,” and the Miles Davis-penned “Nardis,” which, in a lengthy and abstract solo piano exposition, Evans made wholly his own.

Disc four, meanwhile, focuses on Evans’ non-trio collaborations—of which there were many. Highlights include his famous duet partnerships with legendary vocalist Tony Bennett and lyrical guitarist Jim Hall, and a rare pairing with fellow pianist and interviewer Marian McPartland, excerpted from her long-running NPR show. Evans’ work within quartet and quintet settings is also highlighted on this disc, with such esteemed musicians as Cannonball Adderley, Stan Getz, Freddie Hubbard, Toots Thielemans, Zoot Sims, and Lee Konitz. For the final disc of Everybody Still Digs Bill Evans, fans will enjoy a newly discovered live performance by the Bill Evans Trio, featuring Eddie Gomez on bass and Eliot Zigmund on drums. Available in its entirety, the previously unreleased concert took place on June 20, 1975, at Oil Can Harry’s—an intimate club that operated until 1977 in Vancouver, BC. The show was captured for Canadian radio host Gary Barclay, who served as the evening’s announcer, and later aired the set on his popular CHQM jazz show. Then, for nearly half a century, the tapes lay forgotten—until now. Thanks to audio restoration by Plangent Processes and meticulous mastering by Blakemore, the intimate recording sounds just as fresh today as it did more than 45 years ago.

The concert will also be released as a standalone album, On a Friday Evening, and will be available on two 180-gram vinyl LPs, CD, and across digital and streaming platforms. The nine-track outing includes an adaptation of original liner notes from Tesser, who incorporates new interviews with trio members Eddie Gomez and Eliot Zigmund, along with meticulous, track-by-track details on the evening’s program—which included both original compositions and standards.

On a Friday Evening also offers listeners the rare chance to hear Evans and his bandmates settling into a new reconfiguration of the trio, which Zigmund had joined just months before. Tesser explains that this live recording “merit[s] attention, and much of that comes from hearing Zigmund, in an intimate setting away from the concert hall, finding his place in the lineage of the most important piano trio of its era—a trio that for 15 years had exploded the established piano-plus-accompanists model and replaced it with a true trialogue among instruments.”

Indeed, Zigmund knew he was on a different plane entirely, playing alongside Evans. In the notes for Everybody Still Digs Bill Evans, Tesser proclaims, “In the history of 20th-century piano, the music of Bill Evans constitutes an inflection point…. There have been only a handful of pianists…whose innovations so strongly altered the prevailing aesthetic that the timeline breaks down into ‘before’ and ‘after.’”

One of the most influential artists in the history of jazz, Bill Evans (1929–1980), was known for his conversational interplay within his trios, his lyrical compositions, and his matchless approach to the piano. In less than three decades, the prolific artist released over 50 albums as a leader, garnering seven GRAMMY Awards, 31 GRAMMY-nominations and two inductions into the GRAMMY Hall of Fame. In 1994, he was honored posthumously with the GRAMMY Lifetime Achievement Award. Cited as an influence by everyone from Herbie Hancock and Chick Corea to Eliane Elias and Robert Glasper, Bill Evans’ work continues to inspire new generations of musicians today.

Click here to pre-order/pre-save Everybody Still Digs Bill Evans: A Career Retrospective (1956–1980), and stream/download the advance single, “Up with the Lark (Live).”