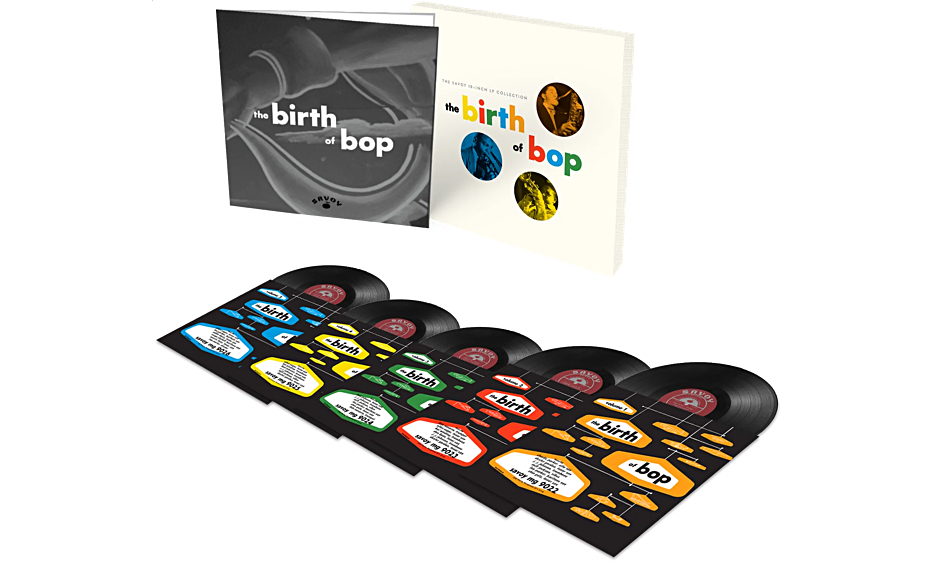 Featuring Painstaking Recreations of the Five 10-Inch LP Compilations That Were Originally Released by Savoy in 1952 and 1953, ﻿This Collection Includes 30 Newly Remastered Tracks Spanning 1944–1949

Craft Recordings proudly celebrates the legacy of Savoy Records with an all-new collection that chronicles the groundbreaking era of bebop (or bop) music. An essential introduction to this vital period in jazz music, The Birth of Bop: The Savoy 10-Inch LP Collection features 30 choice cuts from many of the genre’s pioneers, including Charlie Parker, Dexter Gordon, Stan Getz, Milt Jackson, Allen Eager, Fats Navarro and more. Spanning 1944 to 1949, these landmark recordings were instrumental in the development of modern jazz and found young artists exploring the boundaries of the genre at a time when swing music was the dominant sound and big bands ruled the airwaves.

Available for pre-order today here, The Birth of Bop will be released in several formats, including a vinyl box set, featuring five 10-inch LPs, a 2-CD format, and digital editions on February 10. Each track in the collection has been freshly restored and remastered by Joe Tarantino at Joe Tarantino Mastering, while physical formats include new in-depth liner notes by the GRAMMY-winning writer and broadcaster Neil Tesser, plus vintage photos from the era. Beginning today, fans can stream Charlie Parker’s “Romance Without Finance” as a first taste of The Birth of Bop. Recorded in 1944, the song not only marks Parker’s Savoy debut, but, as Tesser writes, it “offers a perfect glimpse of the transition between swing and bop.”

Bop first began to take shape in the early ’40s, developing in the clubs of New York City. This rebellious new sound was unlike anything anyone had heard before—and marked a significant departure from the predominant songs of the time. “The music inhabited small, flexible combos rather than the big-band behemoths of the Swing Era, and in place of rich, velvety harmonies, the boppers devised complex chords with a stark, thrilling edge,” explains Tesser, who adds that many of these musicians had begun their careers in swing bands, which gave them “something to push against.” Unlike the danceable jazz that was so popular at the time, boppers were revolutionizing the genre in a variety of ways, experimenting with melodies, rhythm and phrasing.

Emerging against the backdrop of World War II, bop was also very much a reflection of the era, notes Tesser. “In the early ’40s, the US’s expanding role in world affairs ratcheted up the pace of daily life: When America entered World War II, manufacturing, communications, and the whole business of living became faster and more furious. The world—especially the US, and specifically New York City—had caught a buzz, and the boppers picked up on it before almost anyone else.” This new way of life was mirrored in the break-neck pace of bop music, which was generally based on eighth notes, rather than quarter notes, making it double the speed of swing.

The early ’40s—specifically 1942 to 1944—also marked a nationwide recording ban, set in place by the Musician’s Union. “Unless you were spending time at Minton’s Playhouse in Harlem—the... laboratory that hosted these after-hours experiments,” writes Tesser, “you’d have had little warning that this music existed until the first records appeared in 1945. Since few had witnessed the gestation period, it sounded to most people as if this music, like Aphrodite, had sprung full-blown from the head of Zeus.”

Established in 1942, Savoy Records would soon be at the forefront of this exciting new period in jazz music, thanks in large part to A&R man, producer, and promoter Teddy Reig. A passionate music fan, and a tireless hustler, Reig was a fixture at New York’s jazz clubs in the early ’40s, becoming friends with many of the era’s rising artists. As soon as the ban was lifted, he formed a partnership with the label. Over the next few years, he would bring many of these foundational bop artists to the label and serve as a producer on their sessions. The majority of the tracks that make up The Birth of Bop were helmed by Reig.

The musicians who pioneered bop music were part of an intimate circle, who often joined in on each other’s sessions. Leading the way at Minton’s were pianist Thelonious Monk, saxophonist Charlie “Bird” Parker and trumpeter Dizzy Gillespie. They were frequently joined by bassists like Oscar Pettiford, Curly Russell and Gene Ramey, and such drummers as Kenny Clarke, Art Blakey and Max Roach. More sax players followed, including Dexter Gordon, Allen Eager, Eddie "Lockjaw" Davis and Stan Getz, while trumpeters like Fats Navarro and Kenny Dorham followed in the steps of Gillespie. Other instrumentalists added additional textures to early bop, including vibraphonist Milt Jackson, trombonists J.J. Johnson and Kai Winding, and baritone saxophonist Leo Parker. Many of these groundbreaking artists are featured throughout many of the tracks on The Birth of Bop, while those influential recordings would pave the way for future jazz icons, including Miles Davis, Sonny Stitt, John Coltrane and Sonny Rollins.

Each track on The Birth of Bop chronicles the narrative of the movement—from Parker’s aforementioned “Romance Without Finance” to Stan Getz’s formative “Stan’s Mood,” recorded at the end of the ’40s. Other standout selections include J.J. Johnson’s “Mad Be Bop,” captured in 1946, and featuring Cecil Payne on alto saxophone, Bud Powell on piano, Leonard Gaskin on bass and Max Roach on drums. The trumpeter’s original tune borrows heavily from Coleman Hawkins’ “Spotlite” (which, in itself, is built off the chords of the standard “Just You, Just Me”). For decades, jazz musicians have regularly interspersed Johnson’s composition while performing “Spotlite.”

“Hollerin’ and Screamin’ (Fatso),” from Fats Navarro, also has an interesting story behind it. The recording—which features tenor saxophonist Eddie “Lockjaw” Davis, pianist Al Haig, guitarist Huey Long, bassist Gene Ramey and drummer Denzil Best—was originally culled from a Davis-led session and released under his name. After Navarro died at the age of 26, however, the leadership was “rebranded” as a memorial to the beloved trumpeter.

Another highlight is “Dexter’s Minor Mad,” which marks the first session led by tenor saxophonist Dexter Gordon and one of several tracks of his included in this collection. Backed by Sadik Hakim on piano, Gene Ramey on bass and Eddie Nicholson on drums, Gordon was just 22 years old at the time of the 1945 recording. As Tesser points out, the horn player’s “sound and passion are unmistakable, and would form the template for virtually every bop tenorist to follow. His laconic phrasing would remain a hallmark throughout his career, as would his behind-the-beat (yet irresistible) rhythmic approach, which at this stage still bears some vestiges of his Swing Era predecessors.”

The Don Byas-led “Byas a Drink” also bridges the gap between the Swing Era and bop, as the tenor saxophonist fronts a quintet featuring trumpeter Benny Harris, pianist Jimmy Jones, bassist John Levy and drummer Fred Radcliffe. Tesser writes that while Byas’ “phrasing remained largely tied to swing, he gradually incorporated the rhythmic characteristics of bop to create a ‘best of two worlds’ scenario. His playing belies the idea that some impassable gulf separated the exemplars of swing and the firebrands of bop.” The delightfully titled track, Tesser adds, is “an elegant composition based on the swing classic ‘Stompin’ at the Savoy’; the melody line is pure bop, but the coda reflects the big floorshows performed by the big bands.”

There are also several selections by Milt Jackson, who transformed the vibraphone from a percussion instrument (as it was widely used in swing bands) into a lead instrument. One highlight is 1949’s “Hearing Bells,” in which Jackson leads a septet featuring trumpeter Bill Massey, tenor saxophonist Billy Mitchell, French horn player Julius Watkins, pianist Walter Bishop, Jr., bassist Nelson Boyd and drummer Roy Haynes. His second recording as a leader, the track offers a stunning example of Jackson’s lyricism on his instrument. Another standout tune is “Junior,” which, Tesser proclaims, “sounds closest to an idealized bop track.”

As the decade turned and swing began to fall out of style, bebop would continue to develop, attracting younger artists along the way and ultimately giving way to further sonic exploration in the ’60s. Setting these changes in motion, however, were the revolutionary artists featured in The Birth of Bop. While many of their names endure in the canons of musical history, the impact of Savoy Records (and its fearless ambassador, Teddy Reig) cannot be understated. As Tesser concludes, “Looking through the personnel that fill the discs on The Birth of Bop, and seeing how many of them belong on the short list of those who brought bop into the world, it truly reveals the vitality and prescience of the Savoy artists roster.”

Available February 10 as a 5-LP Set, a 2-CD Set, and on Digital Platforms.