Cover: Concert by the Sea 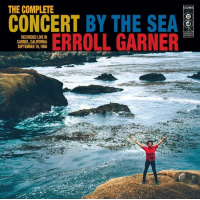 slideshow
When Erroll Garner's Concert by the Sea was released in August 1956, the 12-inch Columbia album featured a striking cover. Photographed from above, the image captured a young white model wearing tight-fitting dark slacks, light-blue sneakers, a cream shirt and an open red jacket. Her head was thrown back slightly to the side, her arms raised above her head in a wide “V" while her legs were crossed as if midway through a dance of joy. Behind the model, the California surf crashed excitedly on the rocks.

The iconic photo—credited to Art Kane (above) and Bruce Steinberg—was presumably taken along the coast near Carmel, Calif., not far from Ford Ord, where the Garner concert was held. Of course, the image could have been taken in Maine for all we know. Art Kane died in 1995.

But as vivid as the original cover was, it always carried a bit of a stigma. Garner was a household jazz name by 1956, thanks largely to the success of Misty, and he was easily among the most remarkable and entertaining jazz pianists of his day. Yet, in a move that can only be explained as Columbia's bid to market the album as a pop offering to white audiences who might not be aware Garner was black, the label went with an easy-listening look rather than Garner himself. Garner's manager, Martha Glaser, was rightfully offended by the move, given how Columbia was showcasing Dave Brubeck at the time on his album covers. As a side note, Other Voices above was recorded two years after Concert by the Sea but was given a bigger marketing push, entering Billboard's pop album chart first.

Now, 60 years later, Sony is attempting to right Columbia's wrong. For its upcoming three-CD released of the Complete Concert by the Sea due Sept. 18, the label has replaced the original cover with a new one. The photograph, also shot from above, now features a black female model wearing dark slacks and shoes and a crimson shirt, her hands raised also in a “V," with the ocean behind her. In other words, with this homage, Sony is apologizing. And by using Columbia's original 1950s logo in the upper right-hand corner of the new cover, Sony is telling us that this is how the original cover should have looked.

Personally, I love the new cover concept. It's incredibly bold and clever, and catches you by surprise. Sony also has every right to change the original cover, since this isn't a re-issue but the first-time release of the entire concert. What's more, the message is provocative and clear: Why not a black model paying tribute to Garner by mimicking the album's original design?

Why not, indeed. Where I do have a quibble or two, however, is with the execution. From an aesthetic standpoint, Art Kane's cover had grace, movement and drama. White or black, the model featured was in ecstasy, telegraphing that the music inside was happy and guaranteed to raise your spirits.

By contrast, the new cover mysteriously seems to lack all of the original's elegance. For one, the model looks like a tourist who scrambled down a cliff and asked her friend above to snap a picture of her. There's no body movement or joy statement here. It's as if the photographer never saw the original and was simply ordered to photograph a model in front of a large body of water with her arms over her head. For another, the seascape is flat and choked with algae, a far cry from the original, which featured the restless surf as a backdrop. If ever there was photographic evidence of global warming, this is it.

Sony's model-swap is a brash statement that reminds us of the deplorable segregationist marketing policies that existed back in the 1950s at major record labels, especially with the rise of do-not-offend record clubs. It's just a shame the label overlooked virtually everything about the original that made it artistically special.