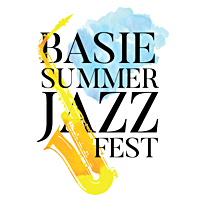 SPONSORED BY PATRIZIA’S OF RED BANK, MONMOUTH COUNTY BOARD OF CHOSEN FREEHOLDERS AND THE ASBURY PARK PRESS

Presales for Count Basie Theatre members will start on Monday, April 10. Information on Basie membership can be found at theBASIE.org.

The Basie Summer Jazz Fest is sponsored by Patrizia’s of Red Bank, the Monmouth County Board of Chosen Freeholders and the Asbury Park Press.

“The Basie Summer Jazz Fest and our Jazz Arts Academy demonstrate the theatre’s commitment to the art form,” said Adam Philipson, President and CEO, Count Basie Theatre. “Our motto is Jazz At The Basie… Where It Belongs, and with this new festival filled with jazz heavyweights, we celebrate the genre and fulfill our mission of celebrating the life of William J. Basie.”

“Patrizias of Red Bank is thrilled and proud to be a supporter of the Basie Summer Jazz Fest,” said Lou Maschi, co-owner of Patrizia’s Red Bank. “We open our arms and welcome everyone who will be entertained by these great and iconic artists as fans come visit the great Basie and our vibrant town of Red Bank.”

Herbie Hancock is a true icon of modern music. Throughout his explorations, he has transcended limitations and genres while maintaining his unmistakable voice. With an illustrious career spanning five decades and 14 Grammy Awards, including Album of the Year for River: The Joni Letters (2007), he continues to amaze audiences across the globe.

There are few artists in the music industry who have had more influence on acoustic and electronic jazz and R&B than Herbie Hancock. As the immortal Miles Davis said in his autobiography, “Herbie was the step after Bud Powell and Thelonious Monk, and I haven't heard anybody yet who has come after him.”

The Chick Corea Elektric Band and Bela Fleck and the Flecktones are two of the most celebrated ensembles in jazz history. Twenty-two time Grammy winner Corea and his Elektrik Band—bassist John Patitucci, guitarist Frank Gambale, saxophonist Eric Marienthal and drummer Dave Weckl–embark on the band’s first Asian tour in more than a decade in June. Bela Fleck and The Flecktones will tour with Corea’s Elektric Band for just three weeks this summer, including their August 8th stop at the Basie.

Formed in 2004 at the acclaimed music school of the University of North Texas, Snarky Puppy exists as both a production team/session band, touring and recording with the likes of Justin Timberlake and Snoop Dogg, and an original ensemble. The band has since won three Grammy Awards: the 2014 ‘Best R&B Performance’ trophy for “Something,” their collaboration with singer Lala Hathaway; the 2016 ‘Best Pop Instrumental Album’ for Sylva; and the 2017 ‘Best Pop Instrumental Album’ for Culcha Vulcha.

Eight-time GRAMMY nominee Dave Koz remembers a time when the summers lasted forever, and the most popular rock, R&B, soul and funk bands of the day were propelled by high-octane, richly arranged horn sections. Indeed, from the late 1960s through the '70s, bands like Sly & the Family Stone, Tower of Power, Earth Wind & Fire, Chicago, Blood Sweat & Tears and other brassy juggernauts of the era ruled the airwaves and opened his young ears to the saxophone’s limitless possibilities as a solo instrument as well as a collaborative voice with the trumpet and trombone.

Multi-talented Larry Graham, Jr. is a baritone singer, musician, songwriter, and record producer. He is best known as both the bass guitarist in the popular and influential psychedelic soul/funk band Sly & the Family Stone, and as the founder and front man of Graham Central Station. He is credited with the invention of the slapping technique, which radically expanded the tonal palette of the bass, although he himself refers to the technique as “Thumpin’ and Pluckin’.”

ABOUT THE COUNT BASIE THEATRE

The Count Basie Theatre’s primary mission is to serve the people of the State of New Jersey by providing a broad spectrum of quality entertainment and education programs that reflect and celebrate the diversity of the region; foster understanding and appreciation for the ennobling power of the performing arts, creates opportunity for cultural enrichment for people at all economic levels, and honors the memory of Red Bank native and renowned jazz pianist William James “Count” Basie. The Count Basie Theatre has hosted an array of world-class artists, including Bruce Springsteen & the E-Street Band, Jon Bon Jovi, John Legend, Crosby Stills & Nash, Ringo Starr, Tony Bennett and Ariana Grande. Count Basie Theatre programming is made possible in part by funds from the New Jersey State Council on the Arts.