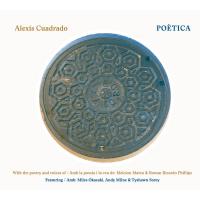 “'Poetica' is a beautifully crafted and deftly performed set of music that is inextricably connected to poetry written by 2 deep and dark modern poets. Alexis wrote the music in such a cinematic way that you really feel you are carried away in a dream. The poets, Melcion Mateu and Rowan Ricardo Phillips, recite the poems very effectively, functioning as the '2 horns' out in front of the fine quartet that Alexis has assembled. Throughout the recording, Alexis' bass is an essential character in each story with his beautiful sound, rhythmic bounce and lyrical solos."—John Patitucci

“On this flotilla of sounds, wrecking beautifully with words, we are drowning-no, resurrecting!-in the lapis luzi of tragic joy, catching the brighten, glittering port of repose. Where have we arrived? These moments of repose in Poètica, when the voice surges with haunting ore-toneover the sparse music, singing “there are no / towers," we know our port is Manhattan. Soon the isle is full of noises, like the inside of a late night cabaret, where-since Walt Whitman is the MC-we can all sing out of key the song of ourselves. And this is the gift of this album; it intimately washes against us the sonic waves of the little things that make New York New York, in spite of the abundant threat they endure. It will endure like the skyline it praises."—Ishion Hutchinson

“The imaginative bassist Alexis Cuadrado revives spoken word jazz with modernist glee, enriching bebop forms, beat generation poetry and multi-lingual storytelling on the lively, compelling Poètica. His musicians and vocalists turn words into rhythms that clamor, protest and even swing, much like Gil Scott-Heron did, while Cuadrado's lucid bass ties it together by expertly fusing syncopation with emotive, improvisational flourishes."—Nick Bewsey, ICON Magazin

“Poètica restitches the seams between languages and media, speech and song."—Ben Lerner

Antoni Pizà, musicologist and scholar, writes in his liner notes for Poètica: '"The moment one learns English, complications set in," proclaims the sardonic, unreliable narrator of Felipe Alfau's postmodern novel Chromos, a work of fiction about a group of Spaniards negotiating the realities of their adopted country, the United States. The “Americards," as they are referred to in the book, are neither full-fledged Americans, nor (tragically) Spaniards any longer. Their in-betweenness is their most salient feature and the source of their elated, often insane, meditations.'

The music of Alexis Cuadrado could be understood as an exploration of that same idea. The bassist/composer's new recording, Poètica, available on Sunnyside Records on May 20th, was preceded by two albums dedicated to the exploration of issues of cultural dislocation. With Noneto Ibérico (2011) he investigated the sonorities that result from adapting certain traits of flamenco and avant-garde classical music to the language of jazz. Then, on A Lorca Soundscape (2013), Cuadrado's first recording incorporating words and voice, he paid homage to the Spanish poet and his celebratory, lyrical evocations of New York City hybridity in the early twentieth century. Cuadrado has also set to music, Chaplin's classic silent film, The Immigrant (2015).

Now, with this stunningly adventurous new album, Poètica, which represents a massive creative leap, Cuadrado creates a multilingual tapestry involving texts by two critically-acclaimed contemporary poets: Melcion Mateu (who writes in Catalan, but living a life in which he is often speaking Portuguese, Spanish and English), and Rowan Ricardo Phillips (a native New Yorker, and translator of Catalan literature). Poètica also features the extraordinary talents of Miles Okazaki on guitar, Andy Milne on piano and keyboards, and Tyshawn Sorey on drums; three artists who rank among the most forward thinking creative forces in jazz today.

On Poètica, the audience/listener is taken through various sonic spaces, composed or freely improvised, built around the poems, written by Mateu and Philips. The voices of these poets are the de-facto front line of this “jazz sextet", creating a moving performance that translates the emotion of their poetry into a unique listening experience. The effect is powerful and stirring, as Cuadrado's music, embodying the confluence of jazz, Flamenco and New Music, combined with Philips' and Mateu's lightning-bolt expression, conjures vivid images with a fully present, personal voice.

Cuadrado, Mateu, and Phillips exploit to the fullest, the advantages of dislocation, distance, and cultural imbrication. Settling in a new country, learning new customs and a new language can be a monumental challenge, but the reward for the true artist is an immense awakening and liberation of one's creative spirit, evidenced on Poètica.

Alexis Cuadrado is a Barcelona-born and Brooklyn-based composer, bassist and educator. His most recent critically acclaimed works A Lorca Soundscape, Noneto Ibérico and Jazz Miniatures for Double Quartet explore the confluence of Spanish and American music and present a unique voice that draws from the crossover of jazz, flamenco and new music. NPR Music states, “Listen to Cuadrado's compositions and you'll find every reason to take him seriously."

Rowan Ricardo Phillips is a poet, literary and art critic, and translator. He is the author of the poetry volumes Heaven (2015) and The Ground (2012), both on Farrar Straus & Giroux, and is the recipient of a 2015 Guggenheim fellowship, the 2013 Whiting Writers' Award, the 2013 PEN/Joyce Osterweil Award and the 2013 Great Lakes Colleges Association New Writers Award for Poetry. Dalkey Archive published a book of his criticism in 2010, When Blackness Rhymes with Blackness and he has translated extensively from Catalan.

Various excerpts in this press release were taken from the album's liner notes by, Antoni Pizà, musicologist, writer and director of the Foundation for Iberian Music at The Graduate Center- City University of New York