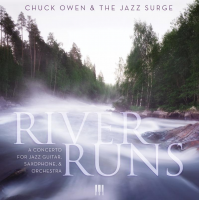 “An incredibly colorful portrait, you can feel the power and majesty of these natural settings. Excellent music!” —Dave Liebman

“‘'River Runs' deep, free-flowing into cross-currents, but always moving forward towards it’s destination, which is an Ocean of Melody, Sound and Soul.” —Randy Brecker

The sun dappling the surface of the water, the roar of a waterfall, the heart-quickening rush of a stretch of rapids – riding a river can be both relaxing and exhilarating, an escape from stress and a thrill ride. Composer/bandleader Chuck Owen captures the beauty and excitement of a day on the river with his latest album, River Runs, which combines his long-running big band the Jazz Surge with a full orchestra for a gorgeous symphonic hybrid.

The Distinguished University Professor of Jazz Studies at the University of South Florida, Owen founded the 17-piece Jazz Surge in 1995. Since then it has been a vehicle for his own compositions and his arrangements of work by the likes of Michael Brecker, who was the subject of Owen’s acclaimed 2009 album, A Comet’s Tail, which featured guest appearances by Randy Brecker, Mike Stern, Joe Lovano and Dave Liebman. JazzTimes wrote that “while the individual solos are quite impressive, it is the ensemble playing and spirit of the full ensemble that really stands out.”

That spirit is vividly amplified with the addition of an orchestra comprising some of South Florida’s finest classical musicians on River Runs. The project was facilitated by a 2009 Guggenheim Fellowship; while Owen has undertaken commissions for the Netherlands Metropole Orchestra and began his career writing for the Cincinnatti Symphony Orchestra under the baton of famed conductor Erich Kunzel, the Guggenheim afforded him the freedom to follow his own muse into the orchestral realm for the first time. Longtime Surge members tenor saxophonist Jack Wilkins, guitarist LaRue Nickelson, and violinist Rob Thomas are the featured voices on River Runs, bringing the ensemble’s unique voice to the orchestral setting.

“I love the coloristic and dramatic opportunities that an orchestra provides,” Owen says. “This project, thanks to the artistic freedom presented by virtue of the Guggenheim Fellowship, was a wonderful opportunity to pursue a vision that from its inception was uniquely mine without having to limit its parameters or compromise on its characteristics.”

Dave Liebman calls River Runs “Copland-esque in scope, suitable as a score for an epic Hollywood movie,” adding, “Chuck Owen has created an incredibly colorful portrait of a part of America’s natural beauty.” Randy Brecker writes that the album is “deep, free-flowing into cross-currents, but always moving forward towards it’s destination, which is an ocean of melody, sound and soul.”

In the end, each movement of the hour-long piece is tied to a specific river, or more accurately, to an emotion tied in Owen’s mind to that river. Following a moody, mysterious prologue that suggests the anticipation of setting out at dawn under still-dark skies, the first movement, “Bound Away,” recalls a trip Owen made as a Boy Scout on West Virginia’s Greenbrier and New Rivers. The piece moves from the peaceful optimism of the early part of the journey to the tension and heady rush of a plunge into the rapids.

“Dark Waters, Slow Waters,” with its brooding, cinematic atmosphere, depicts the waterways that snake through the dense foliage and dark swamps of the Everglades and, in particular, Florida’s Hillsborough River. “Chutes and Wave Trains” is a giddy ride on rushing rapids, inspired by the Chatuga River, which straddles the border of South Carolina and Georgia and was prominently used in the filming of Deliverance, while “A Ridge Away” draws upon two trips that Owen made with his children. Finally, “Perhaps the Better Claim” braves the treacherous waters of the Salmon River, aka “The River of No Return,” and echoes Robert Frost’s famous poem “A Road Not Taken,” a constant source of inspiration for Owen.

“There’s often a luxurious sense of peace, calm, and freedom when you’re paddling downriver.” Owen says of his love of riding the rivers. “But it can be quite deceptive. For as soon as you turn the corner – boom! – here comes a set of rapids or there’s a log blocking the river. In addition to the excitement, however, there’s also a sense of play and close camaraderie with your fellow adventurers that I greatly value. In short, rivers and nature in general has a profoundly positive effect on me.”

It has not, however, always been a source of such direct inspiration. While Owen writes with a natural sweep that evokes pastoral landscapes and bustling scenes, he typically writes from a purely musical, not programmatic, sensibility. But when setting out to compose the music that became River Runs, the concept of his encounters with these rivers and the bonds they formed – whether with his own children or with his father, who passed away during the composition of the music – provided a strong thematic undercurrent for the piece.

“I’m a real believer in having a concept that unites a piece,” Owen explains. “That concept can be simply musical, but a lot of times it can be extra-musical, too. And In working with a piece that I knew was going to be this large, I felt that the conceptual aspect was more important than ever, to find something that could help re-focus the piece whenever my imagination wandered too far afield.”

The project started out as a double concerto for orchestra and a few guest soloists, but soon expanded in Owen’s mind to encompass the whole of the Jazz Surge. “My focus was on trying to write a piece for orchestra that seamlessly attempted to blend jazz elements – improvisation, strong rhythmic grooves – with a symphony orchestra,” he says. “I very quickly realized I was going to need to involve at least bass and drums to be able to provide the atmosphere I wanted, to avoid the sort of rigid division between orchestra and jazz musicians that I really dislike. I wanted to create something that felt very natural and organic and I thought the members of the Surge would add to that.” On its four prior recordings, the Jazz Surge has invited masters like Benny Golson, Nat Adderley, John Abercrombie, Tim Hagans, Ingrid Jensen, and Gary Versace into its fold, along with the aforementioned Brecker, Stern, Liebman and Lovano.

A respected and esteemed educator for more than 30 years, Owen also founded and serves as artistic director for the USF Center for Jazz Composition. In 2012, he chaired the Pulitzer Prize in Music committee and has also served as President of the International Association for Jazz Education and as governor for the Florida Chapter of the National Academy of Recording Arts and Sciences. In addition to the Guggenheim Fellowship he has received the prestigious 2000 IAJE/ASCAP commission in honor of Louis Armstrong and three Florida DCA Individual Artist Fellowships.

With his latest project, Owen combines that wealth of professional experience with inspiration from some of his most personally fulfilling moments. River Runs uses the jazz big band and the symphony orchestra as the colors in a bold landscape that is his finest and most ambitious work to date.