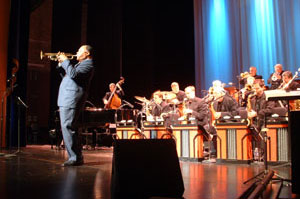 Columbus - The Jazz Arts Group of Columbus (JAG) returns to the historic Southern Theatre to showcase over 100 years of toe-tapping jazz in “Ragtime, Blues & Beyond: A Short History of Jazz,” February 7 – 10. The Columbus Jazz Orchestra will perform side by side the Columbus Youth Jazz Orchestra in this tribute to the most beloved jazz masters including Scott Joplin, Benny Goodman, Count Basie, Duke Ellington, Dizzy Gillespie, Miles Davis and more! The incredible talent of accomplished saxophonist Tia Fuller (Beyoncé, Nancy Wilson Jazz Orchestra) and legendary drummer Lewis Nash (Betty Carter, Branford Marsalis) will guarantee a swingin’ spectacular that cannot be missed!

Under the direction of Mark Donavan, the Columbus Youth Jazz Orchestra (CYJO) provides opportunities for talented high school age musicians to further their experience in America’s classical music – jazz. Comprised of premier players in grades 9-12 from central Ohioand beyond, the CYJO has a 30-week season during the school year, and typically performs at the Southern Theatre prior to each of the Columbus Jazz Orchestra’s Sunday matinee concerts. The CYJO plays literature of the highest level with repertoire from the libraries of the great big bands, including Duke Ellington, Count Basie, Woody Herman, Oliver Nelson, Benny Goodman and Dizzy Gillespie.

Audience members can also join Byron Stripling for a casual and engaging conversation with Lewis Nash and the wonderful guest artists of the Columbus Jazz Orchestra in a new workshop series at the JazzAcademy. “Offstage at the JazzAcademy” provides participants a behind-the-scenes glimpse from the artist perspective on performing with the CJO – adding new perspective to being an audience member. In addition to the opportunity to learn something new, each guest artist will be asked to share what they are currently listening to on their iPods or CD players, introducing audiences to new and exciting music and artists. “Offstage at the JazzAcademy” is free to CJO subscribers and $10 for general registrants. Pre-registration is requested and available by clicking here.

“Offstage at the JazzAcademy” 2013 season schedule:

The 40th anniversary season of the Jazz Arts Group is proudly presented by Grange Insurance. The Columbus Jazz Orchestra receives ongoing support from the Greater Columbus Arts Council, The Columbus Foundation, the Ohio Arts Council, and The Westin Columbus. Concert sponsorship for “Ragtime, Blues & Beyond: A Short History of Jazz” is provided by Plante Moran with media support from The Columbus Dispatch, Outlook Media, WOSU Public Media, and WMNI AM 920.

The dynamic saxophonist has been featured in Jazz Improv Magazine, Rocky Mountain News, The Philadelphia Tribune, The Star Ledger, Downbeat Magazine and many other print and online publications. In addition to receiving numerous awards and marks of distinction, Tia was honored to be the keynote speaker at the Jazz Institute of New Jersey’s 2003 graduation ceremony, where she presented her “Journey to Success” speech. Tia believes her passion for teaching and inspiring students is in her genes because her parents were educators/administrators in the DenverPublic School District. As a devoted educator, she presents lectures and teaches ensembles and masterclasses at some of the most respected institutions in the country, including Stanford University’s “Jazz Workshop,” the University of Idaho’s Lionel Hampton Jazz Festival, New Mexico State University, the IAJE Jazz Convention, Purchase College, WBGO’s “Children in Jazz” Series, Duquesne University and Panama Jazz Festival.

Born in Phoenix, Arizona, Lewis developed an early interest in music and began playing drums at age 10. By age 18, he was performing with local jazz groups. By the time he was 21, Nash had become the “first call” jazz drummer in Phoenix, working with Sonny Stitt, Art Pepper, Red Garland, Lee Konitz, Barney Kessell and Slide Hampton during their engagements in the city.

In 1981, Nash moved to New York City and joined the trio of the great jazz vocalist Betty Carter. For nearly four years, he toured internationally with Ms. Carter. He is featured on three of her recordings, including the Grammy Award-winning “Look What I Got.”

From 1990 to 2000, Lewis was a member of the Tommy Flanagan Trio, and is featured on seven CD recordings with the late piano master. During this period, Nash also toured and recorded with both the Carnegie Hall Jazz Band and the Lincoln Center Jazz Orchestra. His impressive discography (over 300 recordings) includes projects with jazz legends Dizzy Gillespie, Oscar Peterson, Benny Carter, Hank Jones and John Lewis, as well as new jazz stars Diana Krall, Joe Lovano and Roy Hargrove. Demonstrating his stylistic diversity, Nash is also featured on recordings by Natalie Cole, Bette Midler, Nancy Wilson, Kenny Rankin, Melissa Manchester and George Michael.

Currently, while he continues to perform and record with a wide variety of artists, Nash leads several of his own exciting groups, from duo to septet. Outside of his many touring and recording accomplishments, Lewis has become a sought after jazz educator. His lectures, clinics and workshops are as much in demand as his bandstand and studio work.

The Jazz Arts Group of Columbus (JAG) is America’s oldest not-for-profit arts organization dedicated to producing, performing and promoting jazz. JAG is the third largest performing arts organization in Columbus and consists of four focus areas: the Columbus Jazz Orchestra (CJO), one of the world’s finest professional jazz orchestras; the Jazz Academy, JAG’s extensive instructional programs educating both students and adults about jazz and American music; Inside Track, a jazz and blues performance series produced at the historic Lincoln Theatre and beyond; and Affiliate Musicians, a program providing employment opportunities for professional musicians.