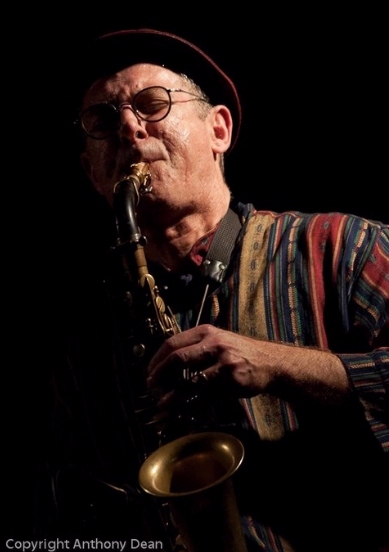 slideshow
Saxophonist Bobby Zankel and percussionist Craig McIver will be performing the John Coltrane composition Ascension for the Ascension Eve Jazz Vespers (marking the end of the Easter season) on Wednesday May 16th at the Church of St. Martin-in-the-Fields, 8000 St. Martin's Lane, Philadelphia PA, at 7:00 PM. The service is free, but a voluntary collection will go to help restore the John Coltrane House (a designated National Historic Site), which has fallen into disrepair. For info: 215-247-7466.

Saxophonist and bandleader Bobby Zankel studied at the University of Wisconsin, Boston's Berkelee College of Music and received a Bachelor of Arts from Empire State College (SUNY). Between 1986 and 1991, he composed and presented three jazz ballets and a jazz opera. Zankel’s compositions have been recorded by CIMP and Contour. He has released four CDs, including Seeking Spirit (with Odean Pope, Johnny Coles and Sumi Tonooka), Emerging from the Earth (with John Blake and Ralph Peterson), and Brand New Eyes (with Terri Lynn Carrington and Craig Handy). Mr. Zankel has performed at many regional festivals including the Battle of Saxophones at Penn’s Landing and the Presidential Jazz Fest at the African American Museum in Philadelphia. He received a Pennsylvania Council on the Arts Jazz Composition Fellowship, a Pew Fellowship Award in 1996, has been an artist-in-residence at the Downington Schools and the Jarrettown School, and received the Herman Goldman Award for his composition Cylle. Zankel currently leads the big band Warriors of the Wonderful Sound.

Drummer/percussionist Craig McIver has been hailed by JazzTimes, Jazz Review and the Philadelphia Inquirer as Philadelphia's premier percussionist and composer. According to Cadence Magazine, McIver's CD A Horse of a Different Rhythm is one important project: “Drummer Craig McIver has been making waves as the drummer of choice for a number of Philadelphia's finest including Odean Pope, Bobby Zankel, Khan Jamal and others...This is definitely a drummer's date...But McIver is going for something a little different with this release. ..this is one heck of a good record with first rate playing all around."