Cody Carpenter’s 'Force of Nature' is an incredible second effort. The years of absorbing the influence of his father and the fusion masters have certainly brought sonic fruit in this 50-minute demonstration of power. There is clearly no slowing down this 'Force of Nature'. 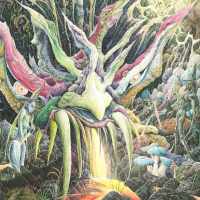 slideshow
Cody Carpenter is at it again with his sophomore release Force Of Nature on Blue Canoe Records. This stunning instrumental prog-rock, fusion effort is the follow-up to the outstanding Interdependence (2018). This prolific songwriter and keyboardist has teamed up with some old friends and new to bring the listener into the prog glory days of Yes and Emerson Lake & Palmer.

Cody Carpenter is the son of Adrienne Barbeau, a star of film, television and the Broadway stage, and legendary Academy Award-winning writer, actor, composer, producer, and director John Carpenter. The Senior Carpenter is best known for classic horror films (Halloween, The Fog, The Thing) and sci-fi thrillers (Escape From New York, Starman). As a composer, he is known for synthesizer-based pieces and is perhaps best known for the theme song to the movie Halloween (1978). It is not difficult to see how Cody Carpenter comes by his synthesizer-based compositions. Cody was introduced to his first musical instrument around the age of three and has been playing and composing original music ever since. In addition to contributing music for two of his father’s films, Vampires (1998) and Ghosts of Mars (2001), Carpenter composed and performed the full-length score for “Cigarette Burns” and “Pro-Life” in Showtime’s Masters of Horror (2005) movie series. Cody co-wrote, co-produced, and performed on the acclaimed Lost Themes (2015) and Lost Themes II (2016) with his father and Daniel Davies. In 2016 and 2017 Cody toured North America and Europe with his father and a six-piece band, performing material from both Lost Themes albums and his father’s films. In 2018, Cody (along with John Carpenter and Daniel Davies), helped to compose the music for the latest Halloween movie released on October 19th, 2018, starring Jamie Lee Curtis.

Mr. Carpenter opens like a tornado with the expansive track “Transcendence". He plays all the instruments on this firestorm except the drums contributed by Grammy-nominated (with Tenacious D) artist Scott Seiver (Jason Mraz, Ed Sheeran). “Transcendence" pulls no punches and sets up Cody Carpenter's blistering pace for the rest of the “Force".

Cody brings in some friends on “Fantasy of Form". He rounds out the rhythm section with multi-Grammy winner Jimmy Haslip (Yellowjackets founding member). Mr. Carpenter starts things off with a bouncing keyboard lead and Grammy winner John Konesky (Tenacious D, John Carpenter) responds with a singing solo. Mr. Haslip lights things up with a riveting solo about midway through just before Mr. Carpenter takes over and brings things home. The interplay between the rhythm section and the soaring keyboard work is mesmerizing.

Cody Carpenter’s Force of Nature is an incredible second effort. The years of absorbing the influence of his father and the fusion masters have certainly brought sonic fruit in this 50-minute demonstration of power. There is clearly no slowing down this “Force of Nature”.