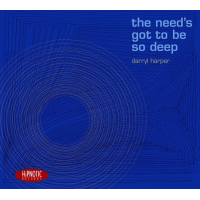 In an interview from 1989, during which he discussed “the cultural aesthetics of black jazz,” the Pulitzer Prize winning poet Yusef Komunyakaa referenced his poem “Blue Light Lounge Sutra For The Performance Poets At Harold Park Hotel” to make the point that “… music is serious business in the African-American community because it is so intricately interwoven with our identity.” Jazz musicians in particular, he added, “…have to have that need to take risks and these come to us in varied patterns and intensities.” That statement cogently sums up Darryl Harper’s approach to creating and performing music and it is fitting the clarinetist, composer and bandleader adapted the opening words of Komunyakaa’s poem for the title of his new recording “The Need’s Got To Be So Deep” (Hipnotic Records HR-10012) that he released in July 2014.

Both a retrospective documentation of the continuum of this multifaceted creative musician’s canon and a milestone in his development as a visionary improviser and composer, the double-CD presents Harper performing original and commissioned pieces in duet, trio, quartet, quintet and octet settings. Works by modern jazz masters Jimmy Giuffre, Carla Bley and Yusef Lateef, important influences and inspirations, round out the wide-ranging program of music. A noteworthy addition to Harper’s discography, the recording not only makes crystal clear what his perspective on jazz is and what he feels its possibilities are, but also showcases the versatility and virtuosity he has developed as an instrumentalist over the course of a 30-year career playing music spanning the stylistic spectrum from jazz and classical chamber music to funk and gospel.

“I see this recording as both a culmination of my work to date as a writer and player and as a retrospective spotlighting the various composers, musicians and ensembles I’ve worked with over the years,” Harper said when asked about the project. In addition to featuring the Onus Trio that Harper formed with bassist Matthew Parrish and drummer Harry “Butch” Reed in the late-‘90s, and the C-3 Project octet he formed in 2005, he plays duets with guitarist Freddie Bryant and pianist Helen Sung, as well as works for quartet and quintet. Violinist and MacArthur Fellow Regina Carter, with whom Harper toured for two years between 2006 and 2008, performs Harper’s composition ‘Dances For Outcasts,’ a two- movement piece he wrote for violin and marimba.

The challenges presented by performing in as transparent a context as a duo make that setting particularly appealing to Harper. “There are no places to hide. You have to be very focused on your partner, and you have to have the stamina to keep that up for an extended period of time,” he explained. And Harper could not speak highly enough of the rewards of pieces like Bryant’s ‘Anthem For Unity’ - a 12-minute multi-movement piece he commissioned from the guitarist, or of conversing musically with the ever-inventive pianist-composer Helen Sung.

“Some of the commissioned works were premiered as far back as a decade ago but had not been recorded in the studio, so I’m grateful to have the opportunity to present them here,” Harper said. For example, the Clarinet Quartet he commissioned from Greg Bullen was premiered in 2005 and is a rare recorded example of The Onus Trio playing with a pianist.

Harper’s music is greatly inspired and influenced by the “chamber jazz” of the Modern Jazz Quartet and the Third Stream genre pioneered by Gunther Schuller and Giuffre. He also occupies a unique position in his generation of musicians in that he is not only a caretaker of that tradition, but has also ushered it into the Third Millenium. For Harper “The Side Pipers,” recorded by Giuffre in March 1956 and released on Jimmy Giuffre Clarinet, his debut album on Atlantic Records, is “a seminal work in the Third Stream tradition, a quintessential example of the combination of jazz and European Classical chamber music.” In fact, the clarinetist was introduced to both Giuffre and Carla Bley’s “Postures,” that he and Sung perform here as a duet, on a recording of a concert played in Bremen, Germany, while Giuffre was touring Europe with the trio he led in the early ‘60s with Steve Swallow and Paul Bley. “I’ve studied every score Giuffre wrote,” Harper confides. “The first time I heard him…well, it was spooky to listen to a clarinetist I’d never listened to before and for whom I had such an affinity…At certain moments, it was almost as if I were hearing myself 30 years in the past.” Harper sees Giuffre’s ‘The Side Pipers’ and Andy Jaffe’s three- movement ‘Woodwind Quintet” as the music and performances that come closest to chamber music on the recording.

Harper also pays tribute to Yusef Lateef, a mentor with whom he studied at Amherst, performing the late NEA Jazz Master’s tune “Water Pistol.” “This track represents some of the straight ahead music I wanted to include on the CD,” Harper explained. “But Lateef exemplifies many other things happening on the album, especially as far as his composing was concerned. He always wrote from a very personal point of view and rejected categories to describe his music. “Jazz,” “funk,” “improvisation,” these were all problematic terms for him. He held originality above all, which is something I aspire to and do my best to emulate in my work.”

Darryl Harper began studying clarinet at age six in his native Philadelphia and was introduced to jazz at 16 by trombonist Anthony Hurdle. Within a year he was working professionally and began sitting in at sessions and performing with Tony Williams, Tyrone Brown, Eddie Green, Bootsie Barnes and other veteran Philadelphia- based jazz artists. Over the years he has performed and/or recorded with Dee Dee Bridgewater, Roscoe Mitchell, Dave Holland, Orrin Evans, Freddie Bryant, Tim Warfield and Uri Caine among others. From 2006- 2008 he performed with violinist Regina Carter and toured the U.S., Europe, South America and the Caribbean in support of her recording I’ll Be Seeing You: A Sentimental Journey.

Harper’s projects as a leader include The Onus, the piano-clarinet duo Into Something and the C3 Project, an octet that presents multi-media work that include dance, video and poetry. His groups are acclaimed for their “poise and maturity” and “the empathy Harper and cohorts have developed over… years of working together.” As a composer, Harper has published and recorded over two dozen works. He has written a film score for the award- winning documentary film Herskovits: At the Heart of Blackness and commissions for choreographers Li Chiao-Ping and Ingo Taleb Rashid and visual artists Peter Bruun and Elisa Jimenez. Harper has been recognized by critics for his “incisive arrangements” and “richly melodic and…refreshingly inventive” writing.