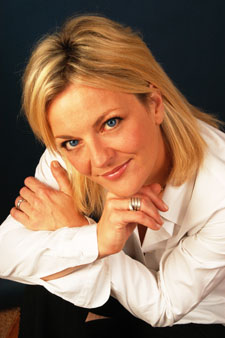 slideshow
What goes on the road, stays on the road, is how the English jazz singer Claire Martin described When in Rome (I Do as the Romans Do), one of 15 songs with music by Cy Coleman at Tuesdays opening night performance of Witchcraft, her show with Richard Rodney Bennett at the Oak Room of the Algonquin Hotel.

When in Rome has lyrics by Carolyn Leigh, Colemans greatest collaborator and the only major American lyricist whose bon mots consistently match Cole Porters in capturing an attitude of jaded sophistication fraught with heartbreak. The more pain is exposed, the sharper the wit that covers it up.

The show concentrates on Colemans early work, in which his elaborately syncopated melodies (Witchcraft and The Best Is Yet to Come are the most famous) and the sly, insinuating lyrics by Ms. Leigh and others constitute high-style songwriting repartee. And Ms. Martins subtle, beautifully acted interpretations give them their due.

Her blas up-for-anything attitude began to melt with her rendition of Im Gonna Laugh You Right Out of My Life. An early Coleman ballad with lyrics by Joseph Allan McCarthy, the song is associated with two of Ms. Martins greatest influences, Shirley Horn and Carmen McRae. When Ms. Martins shell cracked and raw emotion leaked out, she conveyed the downside of pleasure in shivering little phrases and a piercing emphasis on the words beautiful joke.

Mr. Bennett, a celebrated classical and film composer with a long history of accompanying pop and jazz singers, is a shadow vocal presence as well as the shows pianist. A sensitive, truly intimate collaborator, he occasionally took the lead to sing in a slightly slurred husky murmur. The two voices melded in a final medley of non-Coleman standards, The Very Thought of You and I Thought About You, in which they answered one other in a reverberating train of reflection.