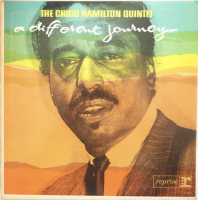 By early 1963, Chico had completed his pioneering chamber-jazz experiments and shifted to hard bop and jazz inspired by the music and saxophone of John Coltrane. On this album, Charles Lloyd wrote all six tracks—Sun Yen Yen, the ballad Voice in the Night, A Different Journey, The Vulture, One Sheridan Square and Island Blues. One Sheridan Square was the name of an off-Broadway theater in Greenwich Village. Between 1938 and 1948, it was home to the jazz club Café Society. The space was occupied by the theater in 1960.

The originals by Lloyd are exceptional and avoid mirroring Coltrane, which would have been a drag. Instead, Lloyd's personality is distinct with Coltrane as the flavor. And like with all albums that feature exceptional groups, there's plenty to say about each musician's contribution. Bonhanon was a trombonist with a strong, fleshy tone; Lloyd was especially lyrical with a Coltrane spirited feel on all three instruments; Gabor Szabo's edgy feel on guitar adds a terrific steely attack and swing (check out his solo on The Vulture), Stinson had a conversational style on bass with solos on several songs, including One Sheridan Square; and Hamilton's persistent snare stands out throughout.

A Different Journey was the followup to Passin' Thru, which was recorded in September 1962 for Impulse and featured the same quintet, with all tracks written by Charles Lloyd. The difference is that the quintet on the earlier album hadn't yet begun to weave in the Coltrane feel.