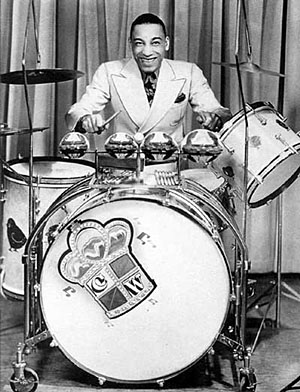 slideshow
Before Chick Webb died in 1939 at the age of 30, he established himself as a model for jazz drumming and his band as a gold standard of swing that humbled even Count Basie and Benny Goodman. In addition, Webb discovered Ella Fitzgerald. He became her mentor, guardian and protector as she developed from a street kid into a great singer. “If it wasn’t for Chick, we wouldn’t have had Ella,” arranger and composer Van Alexander says in a new film bout Webb.

Webb’s importance is firmly underlined in a documentary, The Savoy King, making its world premiere this weekend at the Seattle International Film Festival. I screened anadvance of the film today. It is impressive for its research and production values; even more for its sensitivity in capturing the essence of the gutsy little man who transcended poverty and physical deformity to become one of the most admired musicians of the swing era. Seventy-three years following his death, Webb’s influence on drummers continues. His band’s recordings are still thrilling.

Veteran director and producer Jeff Kaufman melds appearances by people who knew Webb, archive footage and photos from the 1930s, and music by Webb’s band and others. Van Alexander, trumpeter Joe Wilder, dancer Frankie Manning and drummers Roy Haynes and Louie Bellson are among those who discuss Webb’s impact on them and on jazz. Director Kaufman uses Bill Cosby to voice Webb’s words, Kareem Abdul-Jabar to speak Dizzy Gillespie’s, Janet Jackson as Ella Fitzgerald, Jeff Goldblum as Artie Shaw, Rolling Stones drummer Charlie Watts as critic Stanley Dance and actors including Tyne Daley, Andy Garcia and Danny Glover as the voices of other figures in Webb’s life and career.

This promotional clip captures some of the flavor of Harlem in the period, and the Savoy Ballroom’s crucial role in Webb’s rise to fame and in breaking New York’s segregation barrier.

The film builds emotional impact through its straightforward, if not entirely unsentimental, account of a man whose constant pain and illness could not overcome the joy he found in music and in life. The premiere is at Seattle’s Harvard Exit Theater, with showings on Saturday and Sunday. I have been unable to find out where it goes from there, but if you are lucky, The Savoy King will come to your town. For more information, see the film’s website.