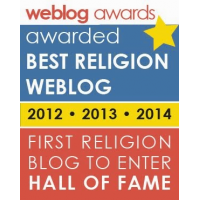 slideshow
Chicago bassist, guitarist and composer Karl E. H. Seigfried has been awarded Best Religion Weblog 2014 for his website, The Norse Mythology Blog. This is the third straight year his blog has won the top spot in the international Weblog Awards. Karl is the only religion writer to have a triple win, and his site is now the first religion blog to enter the Hall of Fame in the world's longest-running blog awards.

In addition to his twenty years as a professional musician, Karl has established a second career writing and teaching Norse mythology and religion. Since 2010, his blog has been a leading public resource featuring original articles on all aspects of Norse myth and interviews with artists, authors, musicians and religious leaders whose work is inspired by the ancient tales. His Worldwide Heathen Census 2013 was the first international survey of modern believers in the ancient faith of Thor and Odin, and he is the author of all Norse-related definitions for the Religion Stylebook of the Religion Newswriters Association.

Karl's Norse religion course at Carthage College was the first course on the subject in a U.S. college religion department. He has also taught Norse mythology at Loyola University Chicago and currently teaches for the Newberry Library Continuing Education Program. He has been interviewed on Norse myth by History Channel, Public Radio International's The World, Viking Magazine and Strings Magazine. He has also been a featured writer and lecturer at the Joseph Campbell Foundation and the Wagner Society of America.

As a musician, Karl is one of the most widely-recorded Chicago players of his generation. He can be heard on twenty-four albums of jazz, classical, avant-garde, rock and country music. His releases on Imaginary Chicago Records have received international acclaim. “Portrait of Jack Johnson" was named one of the top ten albums of the year by the editors of Jazziz and received four stars from DownBeat. “Of Alien Feelings" (his collaboration with Ornette Coleman drummer Calvin Weston featuring John Medeski, Vernon Reid, Todd Rundgren, Jack Walrath and members of Focus, Hawkwind, Spyro Gyra and Supertramp) was named a top album of the year by critic Howard Mandel; DownBeat gave it four stars and named it one of the best CDs of the year.

On Tuesday, April 8, Karl will take a break from writing and recording to lead his trio at Chicago's historic Jazz Showcase. This is Karl's first public appearance with his jazz trio in the Windy City since 2010. The trio (Karl on upright bass, Chris Greene on saxophone, Clif Wallace on drums) will play music from his award-winning Portrait of Jack Johnson album and new music from his upcoming release, Grimms' Fairy Tales.

For this rare Chicago appearance of Karl's jazz trio, sets are at 8pm and 10pm; cover is $10 for adults and $5 for students and musicians. The Jazz Showcase is located at 806 S Plymouth Court, Chicago – telephone: (312) 360-0234. Karl can be reached via the contact page at norsemyth.org.