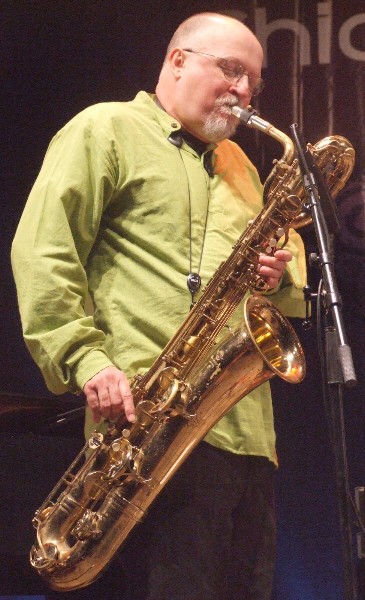 slideshow
After a dismal 2011, in which the Explorers Club only performed once, Boston's beloved cranky yankee polishes his battery of saxophones and follows the groundhog out of midwinter torpor.

Over the course of the unrolling spring, saxophonist/composer Charlie Kohlhase will oversee mid month explorations in Inman Squares favorite back yard gallery, Outpost 186.

The season schedule includes performances on Thursday, March 15th, Wednesday April 18th and Wednesday May 16th all at 8pm with a 10 dollar donation option.

Among the other notable series underway at Outpost 186 are the louche tones of Le Prestige on Friday, February 3rd groping toward lounginess with help from guitarist Jeff Platz on the first Friday of each month.

The inimitable Sheryl Bailey resumes her vivacious guitar duets with Jack Pezanelli on Monday, February 6th with an upcoming get together on Monday, April 23rd.

Mr Platz has his own array of moments in the mid month Fridays with a simple duet with bassist Chris Forkey slated for Friday 2/11.

The other end of the month will meet the second Junk Kitchen extravaganza from Esther Viola and cohort bringing their notions of brevity to a night of 'Mini's.' Short pieces.

You will find this bright moment on Tuesday, February 28th and once more on Tuesday, March 27th.