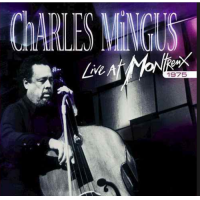 slideshow
On July 20, 1975, Charles Mingus was in Montreux, Switzerland, to perform at the Montreux Jazz Festival. He was on tour to promote Changes One and Changes Two, a pair of albums recorded for Atlantic in December 1974. They are among the bassist's finest albums of the decade and were his first studio recordings in the States up until that point in the 1970s. For better or worse, a bulk of Mingus's 1970s albums were concert recordings.

Now, Eagle Rock Entertainment has released Charles Mingus: Live at Montreux 1975, a two CD set that is a follow up to the DVD it released back in 2004. The CD set sounds as if the band were recorded in the studio. The acoustics are fantastic and the applause has been kept to a minimum. On stage, bassist Charles Mingus was joined by George Adams (ts, fl, vcl), Jack Walrath (tp), Don Pullen (p) and Dannie Richmond (d), with special guests Gerry Mulligan (bs) and Benny Bailey (tp).

The new album's first three tracks are from Changes One. The first is Devil Blues, a raw, fire-eating blues with a snarling vocal by Adams. The second track is announced by Mingus as Free Cell Block F, 'Tis Nazi U.S.A. But it's not. It's Remembering Rockefeller at Attica. I'm not sure whether Mingus confused the two, he purposefully used Cell Block F because it was more controversial or because the two songs have similar chord changes. Either way, it's a splendid rendition that runs 10:32 instead of the album's 5:58.

But the album's high point is Sue's Changes. The song, written for Sue Mingus, Charles Mingus's wife, runs a resplendent 33:27, with a wind-swept piano solo by Pullen, a trumpet solo by Walrath, a bass solo by Mingus and a drum solo by Dannie Richmond. [Photo above of Sue and Charles Mingus courtesy of Sue Mingus]

Goodbye Pork Pie Hat has a slow, mournful pace. Bailey and Mulligan are a perfect pairing, and the song in Mulligan's hands sounds like a track from I Want to Live. Take the “A" Train is fairly pedestrian by contrast to the other songs performed, but it's spirited just the same. Once again, the feel of Bailey's blistering trumpet against the smooth growl of Mulligan's baritone topped by Pullen's piano makes it worth hearing the song yet again.