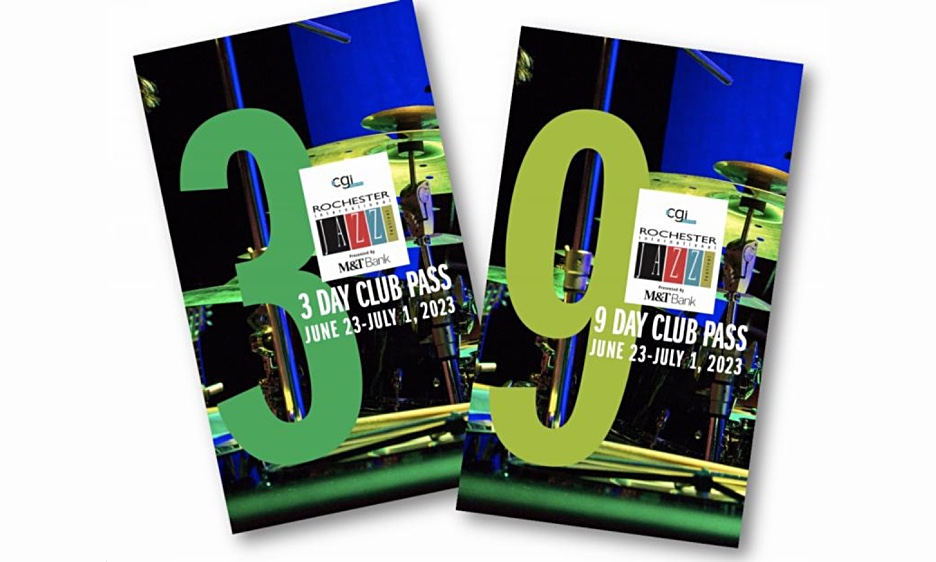 It's the hottest ticket in American Jazz! Experience unlimited access to concerts in the Club Pass Series featuring some of today's most accomplished artists from around the world.
—John Nugent and Marc Iacona, Producers

Club Passes for the 2023 CGI Rochester International Jazz Festival 20th Edition are on sale now at early bird prices. To buy visit RochesterJazz.com or call (585) 454-2060. The Club Pass is the festival's unique and popular value pass to discovery, providing access to 192 Club Pass shows at 11 Club Pass venues at significant savings over individual show tickets. The three and nine-day passes allow music fans to experience unlimited access to concerts in the Club Pass Series featuring some of today's most accomplished artists from around the world. Passes are shareable and transferable. See past artists here.

The festival's 20th Anniversary Edition will be held from June 23 to July 1, 2023, in multiple indoor and outdoor venues in downtown Rochester, New York. The full lineup for the Club Pass Series, Headliner Series, and free shows will be announced in March 2023. The 2022 festival, which returned after a two-year hiatus due to the pandemic, wrapped up with a record attendance of 210,000.

New! Gift Certificates Now Available for Purchase—-In response to numerous requests, gift certificates will also be available this year. They can be used to purchase Club Passes and headliner tickets. Buy now.

Producers Marc Iacona and John Nugent, said, “We look forward to presenting another spectacular Club Pass Series for our 20th-anniversary edition with the highest level of creative music possible from around the world. As we say, it's not just who you know, it's who you don't know!"

Access up to 192 Club Pass Series shows at 11 Club Pass venues all nine days of the Festival. Passes are shareable and transferable. Buy before Dec 31 and save the most! Buy here.

Access Club Pass shows on any three days of the Festival at any Club Pass venue. Passes are shareable and transferable. Buy before Dec 31 and save the most! Buy here. RIJF is transitioning to eTickets to help the environment and reduce the waste of envelopes and thermal tickets. Service charges are the same for Club Passes ordered online and by phone, $6 for print-at-home eTickets, and $8 if eTickets are printed by the festival and mailed to you. Tickets do not need to be printed to be redeemed for Passes prior to the festival in June. Just show your email receipt or provide your ticket order number.

How the Club Pass Works

RIJF one of the world’s leading jazz festivals. Founded in 2002, the multi-dimensional nine-day festival is held annually in downtown Rochester, NY, and presents more than 1750 artists from around the world in more than 300 shows at 20 venues. From legendary performers and familiar favorites to rising stars and new discoveries, the Festival navigates all genres of creative improvised music from all corners of the world. Attendance has grown from 15,000 in 2002 to 210,000 in 2022. Economic impact delivered to the region now exceeds $190 million. In addition to a headliner series and Club Pass Series, the festival also presents more than 100 free shows and events including nightly jam sessions and workshops for young musicians. The Rochester International Jazz Festival jazz scholarship program has awarded almost $500,000 in scholarships to 40 students entering the Eastman School of Music. CGI Rochester International Jazz Festival is produced by RIJF, LLC, a privately held company owned by John Nugent and Marc Iacona. Nugent, Producer and Artistic Director, is a noted tenor saxophonist, who has traveled the world with many jazz artists including Tony Bennett, Ella Fitzgerald, Rosemary Clooney, The Woody Herman Orchestra and The Vanguard Jazz Orchestra. Marc Iacona, Producer and Executive Director, is a Rochester native and President of Simcona Electronics. A business and community leader, he is an avid trumpeter and supporter of the arts.