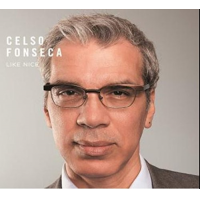 Back in the late 1950s, when the bossa nova was first emerging in Rio de Janeiro, the music was all about a feathery touch. The acoustic guitar had to sound barely strummed, as if the breeze were whistling through the strings. The vocals had to sound almost whispered. Early masters such as João Gilberto, Johnny Alf, Antonio Carlos Jobim, Luiz Bonfá and others wrote songs meant to sound ethereal, like a lover's breathy secret.

In the early 1960s, when producer Creed Taylor brought Brazilian artists to the States to record, sighing orchestral arrangements were added that matched the emotional quality of the melody and vocal. Then in the electronic age of the late '60s and beyond, Rio's tender touch was lost as the drums and bass began to play a much stronger role, incorporating R&B's and rock's new feel.

So imagine my delight when I put on Celso Fonseca's recently released album, Like Nice. Wow. Airy string arrangements akin to those in the '60s by Claus Ogerman, Celso's finger-flick strumming on the acoustic guitar and his hushed vocals. Impossibly relaxing and sensual, with a free-floating exuberance that transports you into the clouds.

I've been a Celso fan since 2003, when I came across his Natural album at Tower Records in the international section. Back then, at the turn of the present century, Celso, Marcos Valle, Ronaldo Bastos, Roberto Menescal and Morello and Barth among others were pioneering a neo-bossa sound dubbed “nova bossa." The music had a lounge feel and paid tribute to the early bossa nova emotionalism but updated it with sophisticated, trippy beats.

Celso recorded his new album live in the studio, without overdubs. String arrangements are by Eduardo Souto Neto while Jessé Sadoc scored the horns. All of the songs here are originals, except for Stormy, recorded by the Classics IV in 1968. Some of the album's originals are instrumentals by Celso, while on others he was joined by his longtime collaborator and lyricist Ronaldo Bastos. As for the musicians, Marcos Valle and Jorjão Barreto are on keyboards, Alexandre Cavallo is on bass, Flávio Santos is on drums, and Júnior Moraes and Robertinho Silva are on percussion. Rildo Hora, Brazil's legendary jazz harmonica player, make a cameo appearance on Canção Que Vem.

I've listened to Like Nice upward of 30 times, and each time I select it, the experience feels like the first time. Whatever stress you're feeling simply evaporates. Bravo, Celso! I can't wait for your next album. And I look forward to seeing and hearing you again in New York. Another must own.

Dig Celso Rio-ize Burt Bacharach and Hal David's Close to You, recorded by the Carpenters in 1970...

And here's Celso in 2003 on Natural, singing She's a Carioca with Cibelle...