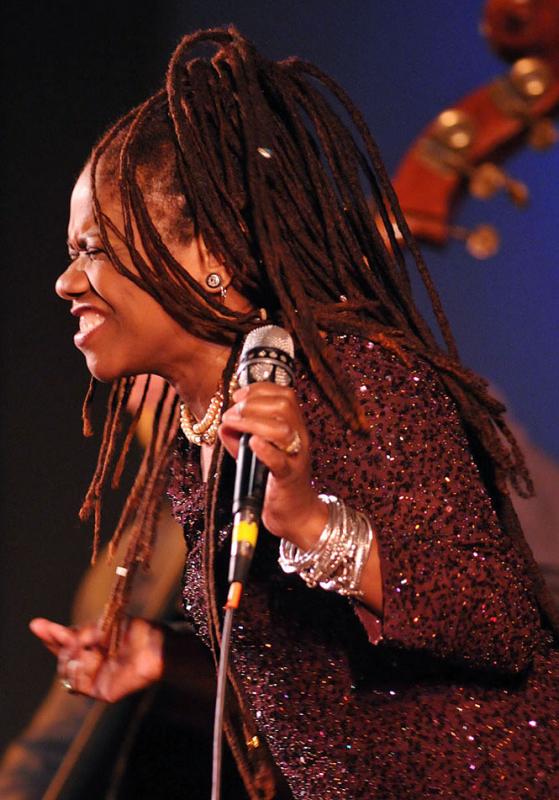 At the start of singer Catherine Russell's Jazz at Lincoln Center performance, MC Todd Barkan (Dizzy's Jazz Club Manager), roused the crowd with, “Thank you for all you bring to music," and introduced the evening's Singer Over Manhattan. Combining jazz club intimacy with educational dialogue and a little Big Band—packed with ringers from New York's best working orchestras, unafraid of emulating their heroes' recorded solos by adding their own improvisations—vocalist Catherine Russell's debut in the Allen Room was a resounding success.

The first things noticeable when she took the mic were her smile, her blues voice with a power to project, the assuredness of her heritage and the personality to make a lyric come alive. From virtually the first note the familiar Armstrong sound leading the band emanated from cornetist/trumpeter Jon-Erik Kellso on “I'm Shooting High," purporting a quality evening ahead. Next up, Hoagy Carmichael's “Ev'ntide" was a real smooth swing number. The band tore it up Fats Waller style on saxophonist/arranger Andy Farber's arrangement of “Everybody Loves My Baby (but my baby loves nobody but me)," receiving appreciative applause after saxophonist Dan Block's solo and a humorous swoop at the song's end.

“I'm In the Mood for Love," from Russell's just-released Strictly Romancin' (World Village, 2012), is a tune that today's twenty-something couples ought to listen to holding hands. Russell delivered the meaning of the lyrics “Now we are one, I'm not afraid" with her voice, when they came in the second chorus. On the balladic “I Cover the Waterfront," it was not about the delicate voice of Billie Holiday, but Russell's own forceful rendition. The star (Russell) and the image of this song, a mood piece, was supported beautifully by Farber's mellow, fuzzy, foggy solo and the entire ensemble. Eyes wandered to the lights down Central Park South—stretching to Fifth Avenue, just a corner of The Park, and then back to the Columbus Circle in the foreground—during Lee Hudson 's bass solo and the ensemble before being brought back when Russell asked:

“Will you return Will the one I love Be coming back To me?

With a kid's joy, Russell related the story of the first brand new family car, a 1956 two-tone Mercury, bought by her father's windfall royalty from Armstrong's rendition of “Back O Town Blues." Here, the band dug this swinger, one on which they had cut their teeth.

Typified by her swingin' version of “So Little Time So Much to Do," from Sentimental Streak (World Village, 2008), next on Russell's tour schedule are the Kennedy Center and Mohonk Mountain House. But before she left the Allen Room stage, an encore of Louis Armstrong's “Struttin' with Some Barbeque," from her Inside This Heart of Mine (World Village, 2010), included Munisteri's banjo solo, a two-clarinet ensemble, a key change led by Brown and a rousing out chorus led by Russell's acrobatic singing.