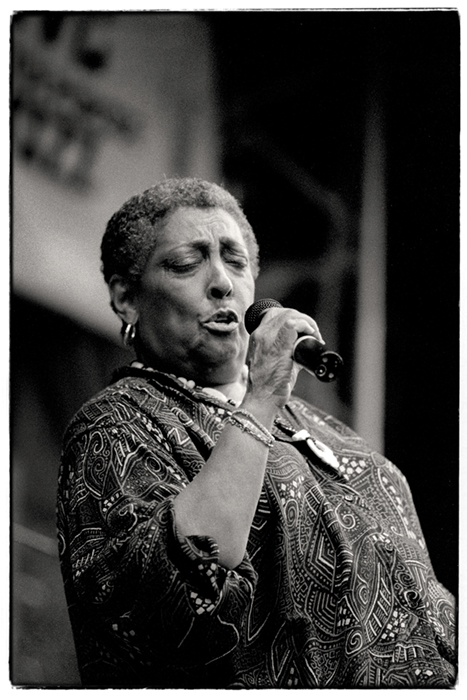 slideshow
In May 1961, singer Carmen McRae was booked into London's popular Flamingo jazz club for a two-week run. The Flamingo, at 33 Wardour Street in Soho, was a dodgy basement nightspot that on the weekends remained open until 6 a.m. On the bright side, the club was known for its sterling sound system.

Just over a year later, in October 1962, the club would be the site of a knife fight between a former and current boyfriend of Christine Keeler, a 19-year-old struggling model. The fight and the events that followed ultimately led to the exposure of another one of Keeler's paramours—John Profumo, Britain's Secretary of State for War. He eventually resigned over his sexual involvement with Keeler in June 1963 as well as her possible relations with a Soviet naval attache. All of this brought down the U.K.'s conservative government. Quite a knife fight.

But before the clash and the Profumo affair, McRae was at the Flamingo during her first trip abroad and first visit to London. She was backed by Don Abney (p), Kenny Napper (b) and Phil Seamen (d). McRae was at her peak, vocally. The songs were I Could Write A Book, Body and Soul, Thou Swell, 'Round Midnight, A Foggy Day, Don't Ever Leave Me, Moonlight in Vermont, Day in Day Out, Lover Man, Stardust and They Can't Take That Away From Me.

Born in Harlem in 1920, McRae took piano lessons starting at age 8. In her late teens, she played piano at Minton's Playhouse in Harlem, where she met many of bebop's avatars. Her first key job was playing piano in Benny Carter's band in 1944, followed by Count Basie's band and Mercer Ellington's orchestra. At a piano job in Brooklyn in the early '50s, she met Decca's Milt Gabler, a conversation that led to a five-year recording contract and 12 albums. Throughout the 1950s, McRae recorded a long series of flawless albums on which she experimented vocally like a jazz pianist. If Ella Fitzgerald was the grande dame of female jazz singers, Sarah Vaughan was a concert goddess and Dinah Washington ruled the jukebox, McCrae was the queen of clubs. Her voice was ideally structured for the intimacy of small rooms, where audiences were captivated by her warm vocal risk-taking, jazz approach and a high-gloss tone.

With McRae, even if you were thoroughly familiar with the song she was signing, you were routinely surprised by her phrasing and the interesting notes she hit along the way. A masterful pianist who often accompanied herself, McRae didn't suffer rude patrons.

I recall seeing her at a New York club in the 1980s and hearing her excoriate someone for talking just before she started a song at the piano. When she was finished, you actually felt sorry for the individual in the darkened club. With McRae, the punishment was the same for all crimes of discourteous behavior: An acidic tongue-lashing. I don't think I heard another word spoken that evening, even after McRae's set. Tables spoke in a whisper.

JazzWax clips: Here's I Could Write a Book...

And here's They Can't Take That Away From Me...

Bonus1: Here's McRae on the Ed Sullivan Show on January 21, 1961, just months before her Flamingo run...

Bonus2: How did the Flamingo club get its name? The house band, the Kenny Graham Afro-Cubists, played the song each night as its theme. Here's Flamingo...