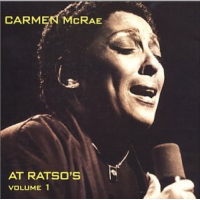 slideshow
Ratso's was one of Chicago's leading jazz restaurant-clubs in the 1970s. It stood on Lincoln Avenue, between West Altgeld and West Montana streets. Bob Briggs owned the club from 1969 to 1977 and named the place after Ratso Rizzo, the Dustin Hoffman character in Midnight Cowboy. By 1975, several major Chicago jazz clubs had folded, including Mr. Kelly's, the Happy Medium and the London House. Ratso's was among those that had diversified by showcasing jazz as well as other music styles and acts favored by those who still went out to hear live music.

In April 1976, Ratso's featured Carmen McRae and her new trio—Marshall Otwell (p), Ed Bennett (b) and Joey Baron (d). Fortunately, someone had the good sense to record the results. Captured over two nights, the music was released in 2002 as Carmen McRae: At Ratso's, Vol. 1 and Vol. 2 by Hitchcock Media. Of particular note was McRae's pianist, whose accompaniment here and on all of his recordings with the singer between 1976 and 1983 was gorgeous. Otwell was a well-kept secret, and many people are unfamiliar with him.

Otwell grew up in a suburb of Toledo, Ohio, in a household where nearly everyone played piano. He played gigs in high school, and by the time he attended Princeton University, jazz was his passion. After a couple of years he flunked out of the Ivy League school after spending the bulk of his nights in New York at jazz clubs.

As Andrew Gilbert wrote about Otwell in the Monterey County Now: in 2007:

When a friend suggested they head out to Southern California, Otwell jumped at the opportunity, and after settling in Laguna Beach he slowly established himself on the Los Angeles scene. In 1975, his buddy, bassist Luther Hughes, got word that Carmen McRae was looking for a new band, and he called her up and asked for a tryout. McRae said she needed a pianist, not a bassist, and Hughes convinced her to let him audition if he brought along a pianist, who turned out to be Otwell. They both got the gig, with drummer Joey Baron rounding out the rhythm section. It wasn’t a smooth transition for her new pianist, as McRae was famously tough on her sidemen.

“When I quit Carmen, that’s when I should have moved to LA and started shaking hands,” says Otwell. “I probably should have moved to New York, but it was hard to face that, I don’t know why. Carmen was the thing that got my name out there. Even now I get calls from singers who saw me work with her, looking for an accompanist.”

Volume 1 of Carmen McRae: at Ratso's features You and I, Elusive Butterfly, Lost Up in Loving You, Hey John, All By Myself, A Letter for Anna-Lee, an Ellington medley, Would You Believe, Them There Eyes, Dindi and I Am Music.

Volume 2 included You Know Who You Are, Just A Little Lovin', Paint Your Pretty Picture With a Song, Haven't We Met?, My Old Flame, I Have The Feeling I've Been Here Before, The Ballad Of Thelonious Monk, Tain't Nobody's Business (If I Do),Like A Lover, Guess Who I Saw Today and For Once In My Life.

Here's Sunday from Vol. 2 (type in the names of the album's other songs at YouTube)...