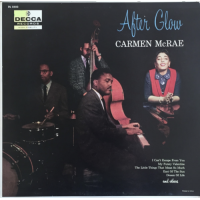 slideshow
Carmen McRae's 1950s Decca recordings remain among her most formative and exquisite. Recorded between 1954 and 1958, the label's nine McRae albums and roughly two dozen singles uniformly captured her voice in solid form, while it was still bouncing around in the midrange before it dropped in the 1960s. After Glow, backed mostly by the Ray Bryant Trio, is one of my favorites.

Captured in Decca's studio on March 6 and 7 in 1957, McRae was accompanied by Bryant (p) Ike Isaacs (b) and Specs Wright (d). On April 18, the album's final four songs were recorded with Ronnell Bright on piano instead of Bryant.

Most of the songs recorded were ballads, maximizing McRae's after-hours, candlelight appeal. But there also were a clutch of mid-tempo tunes. The song list includes I Can't Escape From You, Guess Who I Saw Today, My Funny Valentine, It's the Little Things That Mean So Much, I'm Through With Love, Nice Work If You Can Get It, East of the Sun (and West of the Moon), Exactly Like You, All My Life, Between the Devil and the Deep Blue Sea, Dream of Life and Perdido.

The tracks credited to Ronnell are All My Life, Nice Work If You Can Get It, Between the Devil and the Deep Blue Sea and I'm Through With Love. McRae's voice throughout is viola warm, with the singer tossing in her trademark unexpected jazz notes to mix things up.

McRae's voice exists in its own artistic space, nestled in the twilight between pop and jazz. While she never became as big a recording artist as Ella, Sarah, Peggy or Dinah, Carmen was in a league of her own singing with a purity and special level of jazz vocal intelligence.

Here's one of the very finest versions of My Funny Valentine...