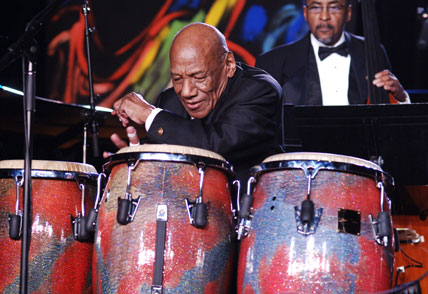 slideshow
Cándido Camero, a conga and bongo player who moved to New York from Cuba in 1946 and wound up recording on hundreds of jazz, Latin and disco albums, died November 7. He was 99.

Cándido's arrival coincided with a wave of Cuban and Puerto Rican immigration. Quotas were eased to take the stress off sagging economies in the Caribbean and prevent the onset of Communism. With the arrival of musicians, Latin music and instruments entered the pop mainstream. Taking hold was the mambo in the late 1940s along with other Latin rhythms and dances in the 1950s, particularly in the Northeast and in San Francisco. For Cándido, the music world was his oyster, and he made the most of it.

Shaking Cándido's hand was an experience. It was as rough as unfinished pine and as tough as saddle leather. Most impressive was the implied strength. Though he never applied pressure, you shook his hand sensing he could turn your paw to dust without much effort. His sole joy was playing and keeping busy, as if work was the key to survival. More than anything, he loved seeing people respond to his playing and the elation express on their faces and by their feet and hips.

Cándido was humble, warm and friendly, despite the face that he had played with virtually every jazz and pop legend you can name, including Charlie Parker, Dizzy Gillespie, Stan Kenton, Billy Taylor, Dinah Washington and hundreds of other artists. And everyone he played with loved him. I recall being at his 90th birthday party in a loft in Midtown. During the celebration, the crowd of people began to part as Tony Bennett made his way over to say hello and linger with an old friend.

Here are 10 of my favorite 1950s tracks featuring the great Cándido, who is up there somewhere in his formal wear, his fingers taped, playing a gig among the clouds:

Here's Chico O'Farrill's JATP Mambo in 1951 with Cándido on bongos...

Here's Cándido on conga behind Charlie Parker playing Repetition at Carnegie Hall in 1952...

Here's the Charlie Parker Quartet plus Cándido at Birdland in 1953 playing Broadway...

Here's Cándido behind Dinah Washington singing Pennies From Heaven in 1953...

Here's Cándido featuring tenor saxophonist Al Cohn on Stompin' at the Savoy in 1956...

Here's Cándido behind Kenny Burrell on Delilah in 1956...

Here's Cándido behind Tony Bennett on Let There Be Love in 1957...

As you can see, this just scratches the surface. Cándido recorded on dozens of great jazz recordings in the 1940s and '50s and in the decades that followed. There also were hundreds of Latin albums, and he even had disco fame in the 1970s as Candido on the Salsoul label.