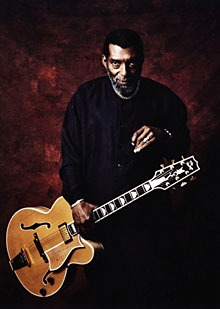 slideshow
Calvin Keys' debut Shawn-Neeq will be reissued on 180g vinyl LP tomorrow, Jan 10, on Tompkins Square. The LP is now available for purchase at tompkinssquare.com

Originally released on the influential label Black Jazz in 1971, guitarist Calvin Keys' debut is a stone classic waiting to be re-discovered. The funky, deep grooves and Calvin's singular guitar stylings, coupled with a heady collaborative feel that inhabits so many early '70's jazz recordings, are all on beautiful display. 40 years later, Tompkins Square proudly re-issues this LP on 180g vinyl just in time for Calvin's 70th Birthday (February 6th, 2012).

Calvin's musical roots originate in his hometown of Omaha, NE, playing with legends like Eddie 'Cleanhead' Vinson. Shortly after the release of his debut LP Shawn-Neeq, Calvin was hired to tour and record with Ray Charles. By the mid-70's, Calvin was working steadily with pianist Ahmad Jamal on the road and in the studio. Since settling in the Bay Area in the mid-70's, Calvin has recorded numerous solo albums and played with many greats, including Taj Mahal, Bobby Hutcherson, Big John Patton and Dr. Lonnie Smith. In 2007, fellow Midwesterner and big fan Pat Metheny included the song “Calvin's Keys" on his album, Day Trip.