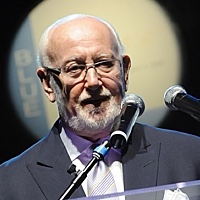 It's with great sadness that we announce the passing of beloved music man & longtime President of Blue Note Records, Bruce Lundvall. He was 79 years old. The cause was complications from a prolonged battle with Parkinson’s disease. Born in Englewood, New Jersey in 1935, Bruce was a lifelong jazz lover whose passion for the music was ignited by Clifford Brown, Charlie Parker & the other beboppers he heard as an underage teenager at clubs along West 52nd Street in New York City in the 1950s.

A self-described “failed saxophonist," Bruce took an entry level marketing job at Columbia Records in 1960 and over the following two decades rose to lead the North American division of the label, signing artists including Dexter Gordon, Herbie Hancock, Stan Getz, Wynton Marsalis & Willie Nelson. After launching the Elektra/Musician label in 1982, he received the offer of a lifetime in 1984 when EMI approached him about reviving Blue Note Records which had been dormant for several years. He jumped at the chance, partnering with producer Michael Cuscuna to bring back the label's earlier stars like Jimmy Smith, McCoy Tyner, Freddie Hubbard, Joe Henderson & Jackie McLean, and signing new artists including Dianne Reeves, Cassandra Wilson, {{Michel Petrucciani, John Scofield, Charlie Hunter and Medeski Martin & Wood.

Under Bruce’s stewardship Blue Note established itself as the most-respected and longest-running jazz label in the world. He presided over a prosperous nearlyyear period of the label's history, reaching commercial heights with artists including Bobby McFerrin, Us3, Norah Jones, Al Green and Amos Lee, while recording some of the most important jazz artists of our time including Joe Lovano, Greg Osby, Jason Moran, Robert Glasper, Ambrose Akinmusire, Don Pullen, Gonzalo Rubalcaba, Terence Blanchard, Jacky Terrasson, and many others.

“Bruce was a one-of-a-kind, larger-than-life human being,” said Don Was, current Blue Note President. “His Joie de Vivre was equaled only by his love for music, impeccable taste and kind heart. He will be sorely missed by all of us who loved and admired him but his spirit will live forever in the music of Blue Note Records.”

Over the course of a music industry career spanning more than 50 years, Bruce was the rare record label executive who was universally loved and trusted. He steadfastly believed in putting artists first, letting the music lead and the commerce follow. Bruce received countless awards including the 2011 GRAMMY Trustees Award and the Jazz Foundation of America’s Lifetime Achievement Award. He served as the Chairman of the Recording Industry Association of America (RIAA); Director of the National Association of Recording Artists and Science (NARAS); Director of the T.J. Martell Foundation for Leukemia Research, the industry's most prestigious charity. He is the namesake of the Montreal Jazz Festival’s Bruce Lundvall Award as well as JazzTimes magazine’s Bruce Lundvall Visionary Award, both of which honor prominent non-musicians who have left a mark on the world of jazz. Bruce’s authorized biography, Playing By Ear by author Dan Ouellette, was released last year.

As a testament to Bruce’s unbreakable spirit, just last year in August 2014 as he struggled against the effects of Parkinson’s, Bruce organized a jazz festival at his assisted-living facility in New Jersey that featured Jones, Reeves, Ravi Coltrane, Chucho Valdes, Bill Charlap, Renee Rosnes and others as a benefit for the Michael J. Fox Foundation for Parkinson’s Research.

Bruce is survived by his wife Kay; three sons: Tor, Kurt and his wife Blythe, and Eric and his wife Johanna; as well as two grandchildren: Rayna and Kerstin. A private family service will be followed by a forthcoming public service, details will be announced shortly. In lieu of flowers, Bruce’s family requests that a donation be made to the Michael J. Fox Foundation.