Home » Jazz News » Brian Bromberg Set to Release "It is What It is" August ... 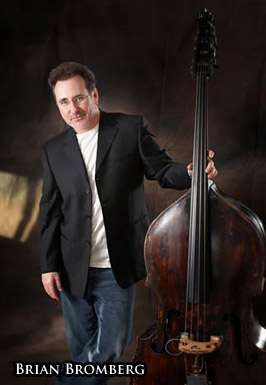 “I write the way I write. I play the way I play. There's nothing I can do about it!"

Exclusive Streaming Track from It Is What It Is

Acclaimed bassist and producer Brian Bromberg has garnered a hard-earned reputation as one of the most versatile and respected players in music, amassing an enviable catalog of straight ahead and contemporary jazz showcasing both upright and electric basses. Confounding the music industry with a string of innovative, eclectic releases since 1985, Bromberg has spent the last decade recording projects driven by very specific sounds and themes - from Wood (acoustic bass) and Metal (electric bass) to other diverse projects celebrating the artistry of fretless bass pioneer Jaco Pastorious (Jaco) and his Grammy-nominated smooth grooves of Downright Upright.

On his fourth project for the Mack Avenue label imprint Artistry Music, Brian unleashes another wide palette of styles letting the chips fall where they may. It's a decidedly funky 13-track set that features a killer horn section and includes not only evocative original compositions but also two cover songs that are sure to raise some eyebrows: The B-52s' new wave dance classic “Love Shack" and Quincy Jones' instantly recognizable TV-Land nugget “Sanford & Son Theme (The Streetbeater)."

So what do you call a CD like this? It Is What It Is.

Brian explains, “I've done a lot of acoustic playing lately so I wanted to feature my electric basses more. But I wasn't trying to make a showy, NAMM show demo kind of record for bass players only - that's not me. Within the songs and arrangements, I use my various basses in many ways. Since I play a lot of piccolo bass (which is a bass tuned to the register of a guitar) it allows me to play lead melodies and some rhythm groove parts that are quite a different role than what you would normally play on a bass with standard tuning. That helps me express myself in different ways and not have everything I play sound the same. I want the music to stand on its own in song-oriented ways yet also push the envelope as a bassist. The result is very in your face - unapologetically so - with a very discernible level of integrity."

The music on It is What It Is shakes out - literally and figuratively - as a joyous celebration of the amazing breadth of sounds capable by the bass. On the title track, Brian doubles the melody, harmonizes with himself and grooves his tail off using both 4- and 5-string basses in addition to a tenor bass. Meanwhile on the humorously titled “Excuse Me?," he uses different effects on his hollow body piccolo, tenor, 4-string and upright basses to simulate plucking, burping and other, um, gaseous sounds to funky effect. “Heaven" showcases the warmer, more beautiful sound of the instruments and is one of four numbers with strings arranged by Tom Zink. Brian sets up a lovely duet with himself on fretless bass and nylon string acoustic piccolo bass for a gorgeous Brazilian-lilted backbeat waltz. And on “The Mirror," he cuts back to just a tenor bass for a solo piece that speaks to the listener like a heartfelt soliloquy. Brian stresses that while guitars are present on the disc in rhythmic and textural coloring roles, all melodic leads throughout the album are played on basses - typically piccolo basses with strings tuned to the register of a guitar.

Beyond the bass, the thrilling new element of It Is What It Is is Bromberg's embrace of a burning horn section, exponentially adding to the funk factor in the music. “The horns are my favorite thing about this new CD," he beams. “I do a lot of sessions with (super producer) David Foster with big band artists like Michael Buble' and Renee Olstead. The spirit and energy in the studio on those recordings is so high - the best of everything. I touched on horns in other records, but I really went there this time. I discovered this young guy named Nathan Tanouye. He is the trombone player in a band called Santa Fe, made up of musicians from many of the Las Vegas show bands. They play most Monday nights at the Palms Hotel in Las Vegas. Nathan does lots of the horn arrangements for the band and they're like frickin' Tower of Power! I sat in with them and had so much fun, I asked him to write some charts for me. I sent him my tunes and the parts he sent back kicked ass. His writing is so fresh yet traditional - very creative. I used a 5-piece horn section that I doubled. Then on certain cuts, I had Eric Marienthal add baritone sax, so I have 11 horns on half those cuts and 10 on the other half. It takes the energy up to another level."

On his composition “Mr. Miller," Bromberg gives a tip of the porkpie hat to Marcus Miller, a musician he greatly respects for not only being an outstanding bassist, but as a producer and writer as well. “I feel we have a bit in common in that respect," Brian states, “but he's in a whole 'nother league because he's that rare guy whose production and writing are never overshadowed by his bass playing. Whatever he lends his attention to is done exquisitely well. I didn't start out to write a song in tribute to Marcus, though. I initially wrote the melody on piccolo bass, but when I played that same melody on my 4-string, it reminded me of Marcus in the way it just sounded so cool. I feel we live by a similar credo: person first, musician second, bass player third."

Though Brian's mastery and attention to detail found him creating some truly vivid originals this time around - from “Elephants On Ice Skates" to “Martinis At The Velvet Lounge" - he truly outdoes himself on the cover songs. He believes The B-52s' “Love Shack" to be a quintessential marriage of Motown groove and Stax brass. “One thing I learned playing jazz festivals is that fans of straight ahead jazz sit, listen and watch. I think that's been one of the downfalls of traditional jazz - a music I love. They're so serious that they've stripped some of the mojo from the music. When you play the more funky side of jazz, people are movin'-n-groovin' to the music. It taught me I can play to the best of my ability, be entertaining and get people moving to the music! “Love Shack" is a party song with more musical credibility than some are willing to give it. I can't wait to see the looks on people's faces when half way through the song they realize that we are playing “Love Shack" and they can't sit still!"

“Sanford & Son Theme" holds a more personal appeal for Brian. “That was one of my favorite shows growing up," he shares. “There was something about Redd Foxx as 'Fred Sanford' that reminded me so much of my dad. They both wore suspenders and were so funny! This is the one song I play solely on upright bass, but it grooves in the vein of my previous CD, (the Grammy nominated) Downright Upright. I think this has the most potential to be played on straight ahead jazz radio. It's a fun song, but righteously penned by Quincy Jones, who I had the pleasure of working with one time recording music for one of his historical libraries. Everybody respects 'Q!'"

Respect is no stranger to Bromberg. Born in Tucson, Arizona in 1960, he initially followed his father and older brother in playing the drums. After struggling with cello in elementary and junior high school, Brian switched to bass at the behest of a teacher and took to it immediately. From age 14-18, he 'shredded' relentlessly on the instrument becoming proficient enough to land gigs 5 to 7 nights a week. At 18, he got his first major gig as a member of tenor sax legend Stan Getz's band and since then has played acoustic and electric bass with hundreds of artists ranging from Horace Silver, Carmen McRae and Eddie Harris to Lee Ritenour, Nancy Wilson, Teena Marie and Dudley Moore.

Brian has recorded 16 previous albums, hitting a home run in 1998 with the chart-topping You Know That Feeling, which netted three singles that all peaked at #3 on the contemporary jazz charts. In addition to the aforementioned thematic projects at the top of this bio, Brian also recorded the acclaimed straight ahead CD, It's About Time: The Acoustic Project, which featured Ernie Watts and the late, great Freddie Hubbard. All in all, he has had 8 Top 10 hits (including co-composing and producing the Rippingtons' sax player Jeff Kashiwa's chart topping “Hyde Park" and two other tracks that reached #1. A much sought-after bass instructor and mentor, Bromberg has also designed instruments as well. “I try to put as much integrity as I can into anything I do," he states.

Summing up It Is What It Is, Brian philosophizes, “I never do anything twice. I wouldn't have it any other way musically or humanly, but professionally it creates a challenge for an audience when you're such a chameleon. But that's who I am. I'm a very simple writer who comes up with songs that are easy to remember and sing along to. It's really easy to play lots of crazy things on more simple and basic tunes, but I usually try to take the more melodic approach and tell a story. On this album, when you hear me play my various basses in the different roles that I use them, I can sound like two or three different musicians playing on the same song. I act and react on each song and instrument a little differently. As a player, that's a wonderful feeling. I hope the listener eventually gets what I'm doing and appreciates it as a breath of fresh air. I also hope they recognize the hard work and integrity within these songs for what they are? Because, It Is What It Is!"