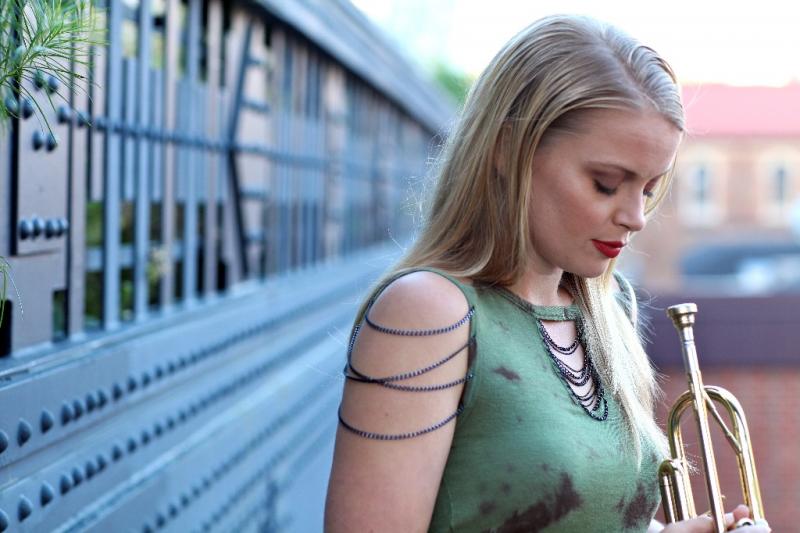 slideshow
"If Louis Armstrong and Doris Day could somehow be the same person, they'd be Bria Skonberg." —Wall Street Journal

Jazz lovers in Oakland and Mill Valley, Calif. Are in for a real treat in late March as Bria Skonberg brings her unique talents to the San Francisco Bay area.

She calls her music Hot Jazz and there is certainly no one hotter than 31-year-old Bria Skonberg on the trumpet. She moved to New York City from Canada just four years ago and now she’s on the forefront of a new wave of traditional jazz revival.

And yes, this music is your grandfather’s jazz with tunes from the 1920s and 30s made famous by the likes of Jelly Roll Morton, Sidney Bechet and Louis Armstrong. For Bria Skonberg, this music should probably be called Red Hot Jazz.

Skonberg brings a vibrant new energy to these historic melodies that their authors would gladly embrace. She is a triple-threat artist excelling as trumpeter, jazz vocalist and composer. Her original music easily fits into what we expect of Trad or Traditional Jazz but with a contemporary flair. Close your eyes while listening to her music and it is not difficult to imagine that Satchmo is playing right alongside.

Clearly there is a renaissance of traditional jazz and Bria Skonberg is leading the way. In 2012, Skonberg was instrumental in founding the popular New York Hot Jazz Festival. It’s an all-day and all-night affair that is a perennial sell-out. The 14-hour, 24-act celebration has featured Hot Jazz, Ragtime and Stride Piano, Banjo Jazz, Dixieland, and Gypsy Swing on three stages. The Village Voice and New Yorker picked it as one of the top jazz shows not to miss. This year it’s set for May 3rd in the Big Apple.

This year on July 31, Bria Skonberg will play the famous Newport Jazz Festival in Rhode Island. Legendary festival founder and producer George Wein handpicked her as an Emerging Star in the Jazz World to be featured on opening night.

And music lovers in Oakland and Mill Valley (Calif.) will be able to swing with this Hot Jazz revival as Bria and her quartet play gigs at the Piedmont Piano Company in Oakland (3/25) and the 142 Throckmorton Theater in Mill Valley (3/26) in late March.

Hailing from Chilliwack, British Columbia, Canada and now living in New York City, award winning trumpeter / vocalist / composer Bria Skonberg is “poised to be one of the most versatile and imposing musicians of her generation."- Wall Street Journal.

In 2013, she earned a Jazz Journalists’ Association nomination for “Up and Coming Jazz Artist of The Year” and is included in DownBeat Magazine’s Rising Star Critics‘ Poll for 2013-2014. She has recently been honored with a New York Bistro Award for “Outstanding Jazz Artist.”

Her first professional gig was as a big band singer at age 16 years, doubling on trumpet. Since she has performed as a bandleader and guest artist at more than 50 jazz festivals in North America, Europe, China and Japan.

Since moving to New York in 2010 she has headlined at Symphony Space, Birdland, The Iridium, Dizzy's and Cafe Carlyle. She has performed with the likes of Nicholas Payton, Anat Cohen, Scott Robinson and Bucky Pizzarelli; she has been featured on Wycliffe Gordon’s projects, studied with Warren Vache, experimented with electronic effects and presented a gig fusing jazz and stand up comedy.

Best known for her knowledge of classic jazz and instigative nature, she is now creating an adventurous style rooted in New Orleans jazz and blues, world percussion, soul, and cabaret.

In 2014 she released her sophomore album on Random Act Records, “Into Your Own”. Her debut US release So Is The Day, peaked at Number 7 on the Jazz Radio Charts. She currently tours the world, headlining major clubs and festivals as well as programming music education workshops for all ages. She is an active volunteer at the Louis Armstrong House Museum in Corona, Queens and serves as co-producer of the New York Hot Jazz Festival.