While this album clearly demonstrates that samba is still alive and kicking, it also reveals that Brazilian music is so much more than the samba and Bossa Nova styles introduced to the States in the Sixties. 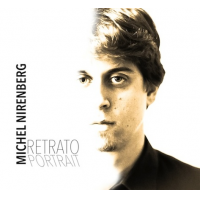 slideshow
At the age of 25, award-winning saxophonist and composer Michel Nirenberg has attracted some of the finest Brazilian and Latin jazz players available to record his debut album Retrato/Portrait on indie label Carioca Music. They are at once his musical colleagues and mentors, drawn to make music that sails across geographic and stylistic borders. The album will be released in mid-June 2015.

With this album of contemporary Brazilian instrumental music, Nirenberg and co-producer Leonardo Lucini aim to share the fullness of Brazilian music at the intersection of jazz. While this album clearly demonstrates that samba is still alive and kicking, it also reveals that Brazilian music is so much more than the samba and Bossa Nova styles introduced to the States in the Sixties.

Nirenberg opens the album on a joyous note by combining two traditional choro tunes, “Chorinho em Aldeia/Na Glória.” The first is by Severino Araújo. “Na Glória” is by Raul de Barros and Ari dos Santos. Argentine guitarist Dani Cortaza (also the album engineer) joins him. Rio-born brothers Leonardo and Alejandro Lucini handle the rhythm section with nuanced precision on this and the other tunes that they accompany. Mainstays in the Washington, D.C. jazz scene, they are university jazz professors by day and lend their talents to international touring artists by night.

Choro is a Brazilian instrumental style born in the late 19th century in Rio de Janeiro, further developed in the next century, and still played in Rio dance clubs. On the opening track, two choro tunes are linked by a melee of shouting voices, conveying the chaos and excitement of a Brazilian feira (open market).

Nirenberg’s alluring “À Deux” brings in the talents of pianist Alex Brown, best known for his work as a member of the Paquito D’ Rivera band. The song goes through several transformations involving classical tango, cha-cha, and swing jazz.

Guitarist Dani Cortaza returns in “Forró From the South,” and Bruno Lucini takes over percussion. Forró is a popular dance style from the Northeast of Brazil. With this tune, Nirenberg pays tribute to the state of Virginia, where he attended graduate school at James Madison University, earning a master’s degree in music performance/saxophone.

Composed by Chico Buarque and Edu Lobo, the beloved ballad “Beatriz” on Track 4 provides a peaceful and somewhat nostalgic interlude in this essentially cheerful disc. It is performed by Brown and Nirenberg, who was inspired by a Milton Nascimento interpretation to create this duo instrumental version.

Track 5 boasts Leonardo Lucini’s arrangement of the Ellington/Tizol classic “Caravan” in a syncopated 7/8 version, employing the samba and partido alto rhythms from Rio de Janeiro to give it a distinctively Brazilian flavor. This version was developed for a special Kennedy Center program, and it has proven to be an arresting crowd pleaser.

Track 6 is a solo performance by Nirenberg of Garoto’s choro waltz ”Desvairada.” The technically challenging song is infrequently performed, but Nirenberg finds the choro waltz beautiful. “It reminds me of classical music,” he says, “with the ascending and descending lines and arpeggios, like a Bach solo partita or cello suite.”

Nirenberg’s “Menina de Avental” fills Track 7. This fast traditional samba was inspired by a lady he saw looking beautiful in a charming apron (avental) while cooking. It is reminiscent of “Manhã de Carnaval” (Black Orpheus) by Luis Bonfa. Cortaza and company make it cook.

“Lonely” marks a return to the ballad form and captures a difficult time for the young composer. He wrote it for a beautiful young woman who had no interest in hearing it. Alex Brown captures the feeling beautifully on the piano with fine support from the rest.

Track 9’s “Samba da Virgínia” is another up-tempo samba. It features venerated seven-string Brazilian guitarist Rogério Souza, with Cortaza, Nirenberg, and Leonardo and Alejandro Lucini. It begins with a samba before a marchinha groove is introduced. “Marchinhas” (small marches) are a typical Brazilian Carnival rhythm. As is evident from the music, Nirenberg played many years at Carnival. The C-section is a contemporary samba groove, with sax/guitar duet and slapping electric bass comping. The D-section enlists the Maracatu rhythm from the state of Pernambuco in northeastern Brazil.

The album ends with “Santa Morena,” a traditional choro in 3⁄4 by Jacob do Bandolim. Nirenberg’s contemporary arrangement reshapes the song into four sections. Cortaza and the Lucini’s are good travel companions, moving the tune from choro waltz to rock’n roll and jazz waltz before returning to the opening choro. A bonus track, “Forró From the South 2,” let’s Nirenberg play loose with many musical styles on his palette.

In the coming year, he’ll perform in the U.S. and Brazil. In addition to the music of Retrato/Portrait, he has already written many new works in classical, jazz, and Brazilian styles for small ensembles and big band.