For me, my sound and musical identity has always been in between the soul music that I grew up on and the jazz that I have studied and grown to love. So I wrote this song to say, that it's okay to be a little different. We should embrace our uniqueness and follow through with it. --Braxton Cook 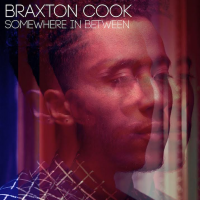 BRAXTON COOK
Somewhere In Between

A 25-year-old with an old soul. Sunny personality, with homemade qualities, and a love of relationships between music passion, family and friends. Braxton's positivity acts as a way to create a message and theme in his music and overall brand.

“The concept behind this album is Love. I know that sounds cliché, but before jumping to conclusions, just know that this album is not the typical happy-go-lucky love story. This album is about my two, sometimes conflicting, loves: the lifelong love I have for music and the love for my girlfriend of 3 years. It's also about the struggles I have had trying to find the balance between the two. This battle to find balance between both relationships has played a pivotal role in making me who I am and my musical evolution. This album will feature both my saxophone as well as my vocal debut. I've decided to name this project “Somewhere in Between" because I so often times find myself caught in between my two loves and similarly between my two favorite styles of music, Jazz and RnB. I feel that we as people have to follow our own hearts and clear our own paths in life. This album is about trusting that intuition.

“I want people to be musically moved like John Coltrane. Moved by the music and spiritual experience."—Braxton Cook