If Amy Winehouse and Ella Fitzgerald had a baby, it would be Jazzy Little Soul. 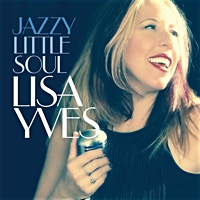 The creator of Jazz For Kids has completed her new Jazz and Soul vocal CD called Jazzy Little Soul. The music was produced by veteran producer Crit Harmon, who has worked with Martin Sexton, Meg Hutchinson, and Lori McKenna. Lisa will be appearing on the UK web show HerVoice. Lisa has sung with Harry Connick, Jr. and starred in Rocker Moms, a 13 episode TV series.

If Amy Winehouse and Ella Fitzgerald had a baby, it would be Jazzy Little Soul. Lisa Yves penned and composed seven of the songs on the album and co-wrote three songs with lyricist R. Keith Swanson. The songs have a timeless standard/great american songbook feel.

Musicians on the album that brought their artistry and expertise are Duke Levine on guitar, Brad Hatfield on piano and string and horn arrangements, Marty Ballou on bass, Jim Gwin on drums,horn players Paul Ahlstrand, Jeff Galindo, Walter Platt, Steve Sadler on Octave Mandolin and Emily Marks on Backing vocals.