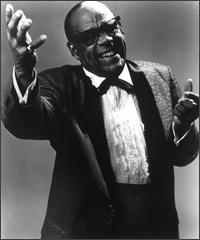 New York NY—The Apollo Theater will present From Havana to Harlem: 100 Years of Mario Bauzá, a special tribute concert to the “Godfather" of Afro Cuban Jazz—Mario Bauzá on Saturday, June 18th as part of its newest series, Cross Cultural Exchange. The concert is a collaboration with TeatroStageFest, New York's Latino International Theater Festival. Four-time Grammy nominee, consummate drummer/percussionist and band leader Bobby Sanabria and his Bobby Sanabria Big Band bring Bauzá's music back to the Apollo and pay tribute to the legendary musician for this exclusive engagement.

With a musical trajectory that spanned over seventy years, Mario Bauzá covered and mastered the realm of symphonic, Latin, jazz, African-American, and popular dance music and was pivotal in introducing Latin music to the Unites States. Bauzá played the Apollo many times and performed with many of the famed Harlem bandleaders, including Chick Webb, Fletcher Henderson and Cab Calloway and then as part of Machito's Afro Cubans.

Primarily known for providing a platform to advance the contributions of African-American artists, the Apollo has also been instrumental in presenting Latin music artists throughout its 77- year history. Since the first appearance of the legendary Machito Afro Cubans at the Apollo in the 1940's, Afro-Cuban jazz, in particular, has had a powerful presence at the Theater.

“There is a wonderful tradition of Latin music at the Apollo going back to Tito Puente, Celia Cruz, Machito and his Afro Cubans and many others, and this show speaks directly to that story," says Jonelle Procope, President and CEO of the Theater. “Mario Bauzá's connection to the Apollo is as deep as that of Ella Fitzgerald and James Brown. The idea of the Cross Cultural Exchange Series is to reflect and illuminate the broad range of music that has been part of the Apollo's legacy. This celebration led by The Bobby Sanabria Big Band honors both the legacy of Afro Cuban music at the Apollo and Bauzá's own legacy."

Bobby Sanabria was Bauzá's drummer for eight years and considers Bauzá as his mentor. Sanabria, recognized as one of the foremost and futuristic practitioners of la tradición living today, is excited about honoring his mentor with this special presentation at the Apollo. “I am so happy to be a part of this celebration of the 100th birthday of Mario Bauzá. He was the father of Afro-Cuban/Latin Jazz and it makes so much sense to honor his legacy at the Apollo because this is where the majestic sound of this music was born—in Harlem, U.S.A. at the Apollo Theater."

From Havana to Harlem: 100 Years of Mario Bauzá is presented by the Apollo Theater in collaboration with TeatroStageFest, NY's Latino International Theater Festival. The Theater Festival takes place June 4-18, 2011. Visit www.teatrostagefest.org or call 212.695.4010 for more information.

Mario Bauzá was one of the most influential figures in the development of Afro-Cuban music, and his innovative work and musical contributions have led many jazz historians to call him the “founding father of Latin jazz." Trained as a classical musician, he was a clarinetist in the Havana Philharmonic Orchestra by the age of nine, where he would stay for three years. Bauzá traveled to New York in 1925 to record with Maestro Antonio María Romeu's band, a charanga, shortly after his fourteenth birthday. Bauzá returned to Cuba but moved back to New York in 1930 and by 1933, Bauzá had been hired as lead trumpeter and musical director for Chick Webb's Orchestra. It was during his time with Webb that Bauzá both met fellow trumpeter Dizzy Gillespie and discovered and brought into the band singer Ella Fitzgerald.

In 1938, Bauzá joined Cab Calloway's band, later convincing Calloway to hire Dizzy Gillespie as well. Bauza continued to work with Gillespie for several years after he left Calloway's band in 1940. The fusion of Bauzá's Cuban musical heritage and Gillespie's bebop culminated in the development of cubop, one of the first forms of Latin jazz. Bauzá went on to become musical director of Machito and his Afro-Cubans, a band led by his brother-in-law, Machito. The band produced its first recording for Decca in 1941, and in 1942 Bauzá brought in a young timbales player named Tito Puente.

The band had a major hit with Tanga, written by Bauzá in the cubop style. There were other good recordings in similar style, Cubop City and Mambo Inn. Bauzá kept his post as director of the Afro-Cubans until 1976. In the 1980s and early '90s, as the head of his own Afro-Cuban orchestra, Mario Bauzá recorded three well received albums and his last band made a guest appearance on a 1992 episode of The Cosby Show. He continued to compose and perform for the rest of his life, dedicating himself to Latin jazz. He became a mentor for younger musicians, including Bobby Sanabria, Conrad Herwig, and Michael Philip Mossman, each of whom has gone on to develop and spread the music that Bauzá formed.

Bobby Sanabria is a celebrated drummer, percussionist, composer, arranger, recording artist, producer, filmmaker, conductor, educator, and multiple Grammy nominee. Sanabria has performed with a veritable Who's Who in the world of jazz and Latin music, as well as with his own critically acclaimed ensembles. His diverse recording and performing experience includes work with such legendary figures as Dizzy Gillespie, Tito Puente, Paquito D'Rivera, Charles McPherson, Mongo Santamaría, Ray Barretto, Marco Rizo, Arturo Sandoval, Roswell Rudd, Chico O'Farrill, Candido, Yomo Toro, Francisco Aguabella, Larry Harlow, Henry Threadgill, and the Godfather of Afro-Cuban Jazz, Mario Bauzá. Sanabria, the son of Puerto Rican parents, was born and raised in the “Fort Apache" section of New York City's South Bronx. Inspired and encouraged by maestro Tito Puente, Sanabria attended Boston's Berklee College of Music from 1975 to 1979, obtaining a Bachelor of Music degree. Following college, he went on to become a leader in the Afro-Cuban, Brazilian and jazz fields as both a drummer and percussionist. Sanabria has been the recipient of many awards, including an NEA grant as a jazz performer, various Meet the Composer awards, two INTAR Off-Broadway Composer awards, and the Mid-Atlantic Foundation Arts Connect Grant three times. In 2006, Sanabria was inducted into the Bronx Walk of Fame having a permanent street named after him on the Bronx's famed Grand Concourse in recognition for his contributions to music and the arts. Sanabria has also recently been awarded the 2008 Lifetime Achievement Award by KOSA for his outstanding accomplishments in jazz and Latin music both as a performer and educator and the 2008 Martin Luther King Jr. Mentor Award presented to him by the Manhattan Country School for his work in the world of jazz. His latest recording, KENYA REVISITED LIVE!!!, a masterful tribute and re-working of the Machito Afro-Cubans legendary KENYA album features him conducting the Manhattan School for Music Afro-Cuban Jazz Orchestra and was nominated for a Latin Grammy for Best Latin Jazz recording of 2009, his fourth nomination.

Based on its cultural significance and architecture, the Apollo Theater received state and city landmark designation in 1983 and is listed on the National Register of Historic Places.