Bobby Darin: In a Broadway Bag 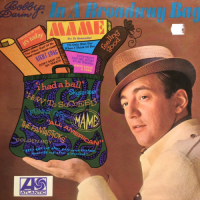 We tend to think of Bobby Darin as the last old-school pop singer before the American songbook was submerged by the rock-and-soul surge of the 1960s. And in many respects he was. But just as Darin was rising as the heir to Frank Sinatra, Nat King Cole and Tony Bennett, he became meaningless almost overnight. One day he was a finger-snapping swinger and the next he was caught leaning in the wrong generation.

But if you listen to Darin's many albums of the late 1950s and '60s, you come to realize that it's a mistake to write him off as a Johnny-come-lately crooner. A good place to start with Darin is In a Broadway Bag. Released in 1966 by Atlantic, the album featured hits of musicals of the day. Arranging duties were split by Perry Botkin Jr. and Shorty Rogers. There are swingers, including Mame, I Believe in You, It's Today, Everybody Has the Right to Be Wrong, Don't Rain on My Parade among others. The ballads include The Other Half of Me, Once Upon a Time and the overlooked Who's Afraid of Virginia Wolf. The album has a few flaws but for the most part it illustrates Darin's prowess just as pop was shifting.

On the album, Darin works his voice as if doing tricks with a yo-yo. His swing is so hip and natural, it's impossible to keep your feet still. Though he had a habit of overlarding songs in places, he understood how to freshen up the genre and never seemed to work at it. I'm often struck by his punched-up versions of songs, many of which surpass renditions by Sinatra and Cole. There was an unmistakable modernity to Darin that made the music and the ring-a-ding-ding thing feel young and shrewd. I wish someone would release all of Darin's albums in one set. It's about time somebody did.

And here's the complete album...

JazzWax by Marc Myers In a Broadway Bag