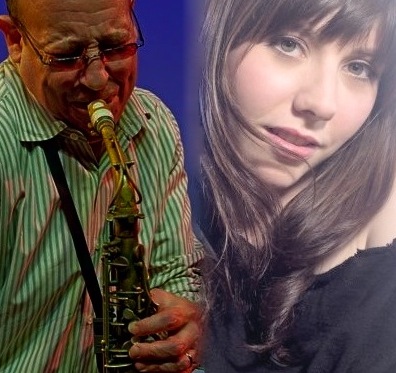 Bob and Emilie Mover recently finished recording a CD devoted to the music of the late vocalist Peggy Lee, and they will debut the Peggy Lee material from the CD at The Kitano, along with the display of state-of-the-art bop saxophone one always expects from Bob Mover.

Emilie Mover, who had the rare opportunity to perform with a jazz giant at an early age because the jazz giant happened to be her father, has already established herself as an indie singer/songwriter whose music has been featured on television programs such as “Gray's Anatomy" and in several TV commercials.

Bob Mover, a Motema Music recording artist whose next CD is expected to be released in early 2013, is best known as an alto saxophonist, but audiences also have come to know his work on tenor and soprano saxophones and on vocals. He recently returned from a tour of major European jazz festivals with Esperanza Spalding & The Radio Music Society. The connections between Bob and Emilie Mover and Esperanza can be traced to Portland, Oregon, where each of them resided in the early part of the last decade, at a time when both Emilie and Esperanza were very young emerging artists who got some of their earliest exposure by performing with Bob.

Among the other members of the band performing at The Kitano, Bob Cranshaw's name is familiar to a wide audience as the longtime bassist in Sonny Rollins' band, while Joe Cohn is one of the most in-demand jazz guitarists in New York and drummer Jimmy Wormworth is one of the great veterans of the New York jazz scene.

Extending the “family business" theme, Joe Cohn is the son the late saxophonist Al Cohn, and Jimmy Wormworth's name is often confused with that of his son, James Wormworth, the drummer on Conan O'Brien's show.