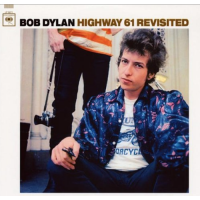 slideshow
As I write in today's Wall Street Journal (go here), a decision made by Bob Dylan 50 years ago this week altered the direction of rock and jazz. On the night of July 25, 1965, Dylan performed at the Newport Folk Festival on a Fender Stratocaster electric guitar. He was backed by Mike Bloomfield on electric guitar, Al Kooper on organ, two members of the Paul Butterfield Blues Band—electric bassist Jerome Arnold and drummer Sam Lay—and Barry Goldberg on piano.

Three songs into the concert, Dylan decided to cut his set short. A segment of the 17,000-member audience had been booing since he opened with “Maggie's Farm," displeased that Dylan had dared to appear with an electric band. Folk was an acoustic form and proudly so. The electric guitar was loathed by folkies in the early 1960s—viewed as the manipulative instrument of  pop-rockers who teens were clamoring to hear. Folk also was seen as serious music for college-educated young adults and presided over by elders from the 1950s who had sacrificed to pioneer the form.

Dylan on the electric guitar, accompanied by an electric band, was considered heresy, especially after folk elders had taken him under their wing. But by mid-1965, Dylan was fed up. Even though other folk and pop-rock artists were having chart success with his songs, folk music's Ludite audience continued to insist he follow in Woody Guthrie's and Pete Seeger's footsteps, remaining true to folk's traditions.

By June 1965, following Dylan's tour of Britain in May (captured by D.A. Pennebaker's documentary, Don't Look Back), Dylan was looking for a way to stand out. While recording Like a Rolling Stone at Columbia in June, Dylan decided to give the song originally written as a waltz a pop twist, shifting the beat to 4/4 and adding electric instruments. The single was released on July 20, and four days later, Dylan was in Newport rehearsing with his electric band for a performance the next night.

When they came out on July 25th, the sound system had been cranked up for impact. In later years, many who were there would claim that the volume had been up too loud and the audience was complaining about the distortion. Or so they say. My take is that the audience was making a deliberate statement in protest about Dylan's look, his guitar, the song he was singing, his perceived disrespect of the folk hierarchy and the general belief that he had sold out, duping his fan base.

Whatever the reason, Dylan's 17 minutes on stage that night changed music—not deliberately or purposefully. It just happened. At the end of 1965, the Beatles released Rubber Soul and a new generation of singer-songwriters began composing and recording music that more clearly expressed their viewpoint and poetic ambitions.

What needs to be understood is that by 1960, rock 'n' roll had stalled. Elvis Presley was just returning from the Army, Buddy Holly was dead, Jerry Lee Lewis was off the radio thanks to his disclosure of marriage to his cousin's daughter, and the just-completed Congressional payola hearings had tamped down rock's excesses.

The result was the rise of pop-rock—a formulaic genre that produced girl groups and teen idols who recorded songs written in the offices at the Brill Building and 1650 Broadway. Even the Beatles' arrival in February 1964 was a pop-rock event engineered by record companies to stir up female teenage record buyers.

After Dylan “went electric," rock changed out of necessity. Music shifted from the hands of pop hitmakers to the artists themselves, many of whom demanded space to experiment in order to make an artistic statement. Motown also took notice of Dylan's approach (go here), and by 1968, Miles Davis was recording with an electric band. Jazz-rock fusion wasn't far off.

Which makes one wonder what would have happened if Dylan didn't perform with electric instruments that night in 1965 and the audience didn't boo. Dylan didn't invent hard rock or jazz fusion, but he was the match that ignited a new amplified poetic consciousness that continues to this day.