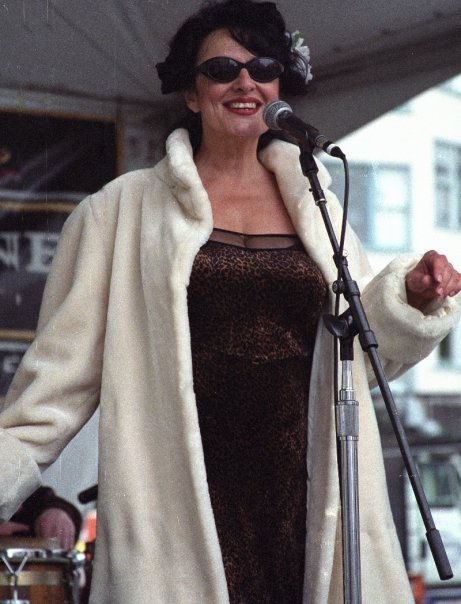 slideshow
Renowned Black Olive Jazz and San Francisco vocalist, Kay Kostopoulos, will be performing in New York City this November to kick off Thanksgiving week at Pangea in the East Village.

Her new show: Myth, Music and Magic: A journey of biblical, historical and mythical proportions, explores heroines like Salome, Delilah, Cleopatra, and Persephone. Seductresses? Destroyers? How much of these stories were true? What’s the other story?

Online tickets are $20 and the door price at $25 (cash only)
Purchase your tickets here.
Proof of vaccination required to enter.

“Near the end of the set at Birdland, Kay Kostopoulos dressed as a member of a harem and sporting two pairs of finger cymbals soloed on “Boulevard Of Broken Dreams" was as close to finger cymbal virtuosity as I've ever heard (and if she wasn't also from the Bay Area, I'd claim this as an “only in New York" moment!)” —Concert Reviews, Frontpage by Thomas Cunliffe

“Her love of the text, subtlety of word, and appreciation for the audience promise a performance as deep as those big, dark eyes starring right back at you.” —Palo Alto Weekly

Pangea a Restaurant, Bar, and Alt-Cabaret Supper Club and New Work Incubator in the East Village, New York City. Known for supporting artists of all persuasions; offering an essential safe-place for taking artistic risks; and for its delicious and spirited Downtown hospitality. Its role as an incubator for new work, in a city where cost of living has become prohibitively stratospheric for artists, is seen as vital to preserving the East Village’s identity as a counter-culture hotbed.