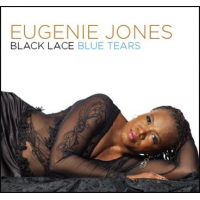 slideshow
With the release of her debut album Black Lace Blue Tears, Seattle-based Eugenie Jones emerges as a rising jazz vocal star with a deep-rooted sense of where she’s headed as an artist. Jones’s repertoire is based primarily on her own striking originals, and she also had a hand in all of the arrangements. The disc is due from Jones’s Open Mic Records on May 28.

Jones reveals herself to be a remarkably mature, refreshingly different artist, both as a song stylist and as a songwriter. Nine of the album’s 11 selections are original compositions that offer new insights into a variety of emotions and situations, from the joyous opener “A Good Day” to the heartbreaking ballad “All the King’s Men,” the gently swinging “Perfect,” and “I Want One,” a song about looking for Mister Right that has been a favorite of women in her audiences. Jones also puts her stamp on “My Funny Valentine” and the Paul Desmond classic “Take Five” (with lyrics by Dave and Iola Brubeck).

Surprisingly, Jones never planned for a career in singing. Growing up in Morgantown, West Virginia, Eugenie (pronounced “u-gee-nee”) had sung with the Baptist church choir directed by her father, but at home she left the singing to her mother, the late Tommie Parker. “She had an incredibly beautiful voice,” Jones says. “Even when she wasn’t in church and she was cooking and doing things around the house, she was always singing.”

Eugenie went on to earn degrees in business and marketing, working as a business owner, consultant, and marketing specialist. When her mother took ill, she invited her to move west to spend her final years living with Jones and her two sons in Bremerton, Washington. It wasn’t until her mother’s death five years ago that Eugenie decided to take up singing herself. “I missed hearing her voice around the house,” says Jones. “I think that was what drove me to pursue it.”

Jones made her professional debut as a jazz singer only two years ago and has since drawn a devoted following to her unique musical artistry at venues throughout the Seattle area and as far south as Portland. One critic has likened her to Nina Simone, as has Greta Matassa, the noted Seattle jazz vocalist with whom Jones studied.

Although Jones has been writing poetry since she was in high school, and for 19 years wrote a weekly wellness column for a Washington paper that was often picked up by the national Scripps-Howard newspaper chain, she didn’t try her hand at writing songs until just a year before Black Lace Blue Tears was recorded.

“I kind of felt my way through a paradigm that seemed to work for me,” she says of her songwriting process. “I’m really just trying to capture an emotion when I’m writing.”

Upcoming performances by the singer include Seattle’s Lakeside Bistro 5/25, the Collective Visions Gallery in Bremerton 6/22, the Sorrento Hotel in Seattle 6/29, and the Music in the Park Concert Series in Everett 6/30. “I absolutely love jazz,” states Jones. “Some people speak of dreaming in color. I’d say I dream in jazz and wake the next morning with lyrics and arrangements in my head. This—in front of the microphone, sharing my dreams with others—is where I belong and where I feel so at home.”