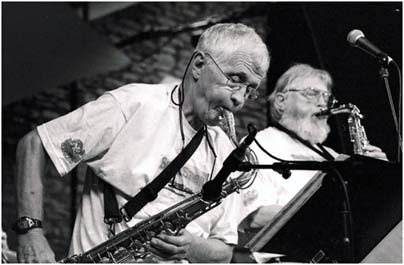 slideshow
Tenor Saxophonist Bill Perkins' first album as a leader was On Stage for Pacific Jazz Records. In February 1956, “Perk" or “Phineas" assembled an impressive octet and reached out to California's leading arrangers of the day for charts. What makes On Stage special is Perkins' saxophone sound, which is strong, eloquent and smoothly sculptured. As legendary arranger and tenor saxophonist Bill Holman told me yesterday, Perkins was among the finest practitioners of the Lester Young style of playing and had a relaxed personality to match. More with Bill Holman on Bill Perkins in a minute.

Like most West Coast tenor saxophonists of the mid-1950s, Perkins identified most with Young's airy swing style, adapting it neatly to fit his own personal blowing agenda. What set Perkins apart from the Prez pack was what critic Ralph J. Gleason called “disciplined emotion." Perkins was keenly aware of how smooth he wanted to sound and worked hard to achieve it. When he wasn't playing in bands and groups, Perkins would practice for hours before and after gigs to polish his pleading tone and phrasing.

Born in San Francisco, Perkins attended high school in Santa Barbara and studied engineering at California Institute of Technology and Stanford University [pictured]. Perkins had played the clarinet in high school, but it wasn't until he began playing the tenor saxophone at Stanford with saxophonist Chuck Travis, a veteran of Jimmy and Tommy Dorsey's orchestras, that he fell in love with jazz.

Bolstered by his natural talent and Travis' encouragement, Perkins [pictured] bagged engineering and enrolled at Westlake College of Music in Los Angeles. After his studies, Perkins played with a range of leading West Coast musicians, developing a reputation as a complete reed and woodwind player who moved effortlessly between saxophones, the flute, oboe and other instruments. What helped Perkins stand out, even among the titan players of the West Coast, was his diligence and humility.

On Stage was recorded a month later in February at the Music Box Theater in Hollywood. The musicians joining Perkins were Stu Williamson (trumpet and valve trombone), Carl Fontana (trombone), Bud Shank (alto sax), Jack Nimitz (baritone sax and bass clarinet) [pictured], Russ Freeman (piano), Red Mitchell (bass) and Mel Lewis (drums). The arrangers were hardly slouches. Two of the eight tracks for On Stage were arranged by Bill Holman, two were by Lennie Niehaus, one was by Johnny Mandel and three were by Perkins. Each tune showcases Perkins' low-sweeping lines and high-register weaving. Through his career, Perkins appeared on 414 recording sessions between 1951 and 2002. Perkins died in 2003.

To gain insight into what made Perkins tick, I gave Bill Holman a buzz:

“Perk was the most humble person I've ever known, musically or otherwise. He was one of my dearest friends. For whatever reason, he never felt that he was measuring up, which is why he worked so hard. Like a lot of guys back then, Perk was Lester Young-influenced. He had worked for years to get that pure sound he had in the middle 1950s. It was such a beautiful sound that people commented on it then, and they're still talking about it today. [Photo of Bill Holman by Gordon Sapsed]

“Perk was a meticulous musician, and his sound had to be just so. His was a big sound, bigger than Zoot [Sims'] or Stan [Getz's]. Perk worked tirelessly to remove all of the edge and sharpness to get that pure mellow sound. I listened to him so much that I could identify him not only by what he was playing but also by that signature sound. Through the years, Perk's playing changed, and his fans were unhappy that he gave up that early sound.

“Many tenor players back in the 1950s adapted the Lester Young sound. But with Perk, his sound was notable for the absence of any harsh edge. When he was on Woody Herman's band, he used to practice after the gig, as the other guys were packing up and getting on the bus [laughs]. He had that kind of dedication.

“That album [On Stage] gave Perk a chance to show his love for Prez. Perk wanted his sound to be the way he wanted it. He also had a wicked and sophisticated sense of humor.

“Why was he called Phineas? I believe it was a nickname that started in the Herman band. Perk had a prim and proper manner. Guys used to kid him about that, and the name stuck."

JazzWax tracks: Bill Perkins' On Stage seems to be out of print in the U.S. In many ways, it's a perfect album. The horn harmonies and voicings are especially shrewd, and the blowing by all is up a notch, as if each musician knew he was being judged by the others for the quality of his ideas and skill. Most of all, you get to hear Perkins out in the open on uptempo ensemble pieces and ballads, giving you an opportunity to appreciate the qualities Bill Holman refers to above. I bought a remastered copy of On Stage recently from Japan, and the sound is terrific. You'll find it here.

JazzWax clip: For a taste of Perkins' sound in 1956, here he is playing Easy Living--with John Lewis (piano), Percy Heath (bass), Chico Hamilton (drums) and Jim Hall (guitar). It was recorded on February 10, 1956, one day after Perkins recorded On Stage...