This was done with the intention of a jazz album but with pop/rock sensibilities. 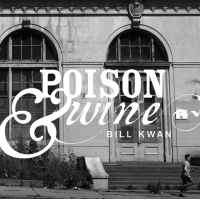 slideshow
On Poison & Wine, jazz vocalist Bill Kwan experiments with new sounds and styles, delivering an impeccably curated collection of songs by the some of the most transcendent songwriters of our generation. With lyrics filtered through his own heartbroken lens, he delicately reconstructs the tracks much like a jazz singer interpreting the great classics. A lovelorn rendering of these painful-yet-beautiful songs, Poison & Wine was released on August 17th, and debuted a video for the lead track, “Missing,” last month. Kwan will also launch a headlining tour in support of Poison & Wine, beginning with a series of shows in the Bay Area.

“When I started work on this project about a year and a half ago, it was supposed to be a jazz project,” explains the longtime jazz singer who studied under esteemed jazz vocalist, Kitty Margolis and at The California Jazz Conservatory in Berkeley, California. “So since the original gestation was as a jazz project, it was natural to pick covers. However, once Matt (Pierson, producer), Teddy (Kumpel arranger) and I started to work on the songs, it gradually turned into a non-jazz album. This was done with the intention of a jazz album but with pop/rock sensibilities. We wanted to combine genres, including pop, rock and country, and started by choosing very contemporary songwriters with a strong point of view and excellent material that highlighted how alone and vulnerable of a space I was in. As a fan of these songs and songwriters, whose work means so much to so many people, we wanted to approach their art as delicately as possible. The arrangements on the album were chosen for a depth and uniqueness but also as a cohesive sound. Each track ties together with the arrangements, but each song sounds similar but very different from each other. The musicians on this album are some of the best jazz musicians out there, so the approach to the album is very much informed by jazz, including my vocals.”

Each track on Poison & Wine is anchored the sadness and tension of the original, but is cleverly reassembled at the hands of Kwan and his producer Matt Pierson (Miles Davis, Al Jarreau, Joshua Redman, Brad Mehldau, Pat Metheny). They add slide guitar to several tracks including Blur’s “No Distance Left To Run” and Coldplay’s “The Scientist,” a bossa nova beat and a CB radio microphone to Beck’s “Missing,” plenty of forlorn anger to spare on Ryan Adams’ “Come Pick Me Up” and “Sweet Nothing” (Calvin Harris and Florence Welch) and traded out guitars for a bamboo Japanese shakuhachi flute on Gillian Welch’s “Revelator.” Additional musicians on the album include Kevin Hays (piano, keyboards), Tony Scherr (guitar, bass), Teddy Kumpel (guitar) and Tony Mason - Drums (drums).