SOURCE: RIFFTIDES BY DOUG RAMSEY
March 16, 2018
Sign in to view read count
Their recording histories encompass dozens of collaborations, but in their new albums two of the most prolific recording artists in modern music go it alone.

Guitarist Bill Frisell reaches into his storehouse of compositions to revisit several that he has recorded before, and to play others for the first time. Frisell is alone, yes, but with the help of producer Lee Townsend and engineer Tucker Martine he overdubs guitar layers and uses looping, applying the electronic wizardry that is a major component of his distinctiveness. The opening track, “Pretty Stars,” is a stunning example of Frisell’s use of looping as a means of creating subtle abstractions within uncomplicated music. Later in the album he revisits the “Stars” theme as “Made To Shine” on acoustic guitar without enhancement. In the blues “Winslow Homer,” in less than three-and-a-half minutes Frisell uses looping that builds toward what amounts to a conversation with himself—that is, between his acoustic guitar and its electronically enhanced counterpart. Another blues, “Go Happy Lucky,” all on acoustical guitar, is even shorter, and expressive in a different way that can’t be explained merely by the fact that it’s in a different key. It’s a different way of interpreting, of feeling, the blues. “Monica Jane,” named for Frisell’s daughter and first recorded with pianist Paul Bley three decades ago, loops in electronic counterpoint interjections that seem be heading for a conclusion in extraterrestrial regions. But the piece ends on a conventional C-major triad. Surprise! Frisell is full of surprises, and of satisfactions. The longest track in Music Is barely exceeds five minutes. Close listening to this album kept my ears occupied for a couple of days. 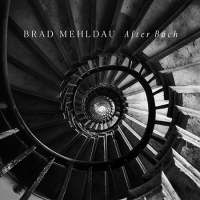 While Frisell gives the listener new approaches to his own music, pianist Brad Mehldau pays tributeto Johann Sebastian Bach. Mehldau flawlessly plays five selections from Bach’s The Well-Tempered Clavier, for nearly 300 years a touchstone of classical music. He follows each of the Bach pieces with an improvisation that it inspired.

For example, his performance of Bach’s Prelude no. 3 in C# Major moves Mehldau to spontaneously create “Rondo,” the first of his After Bach impressions. It’s a lively venture in 5/4 time, loaded with the harmonic inventiveness that Mehldau has long practiced in his jazz playing. His answer to Bach’s brief Prelude No. 3 in C Major from Clavier Book II is his own “Pastorale,” a minute longer than the Prelude and rich with contrapuntal lines that Bach might well have admired. After the last of the Clavier pieces, the Fugue No. 16 in G Minor from Book II, Mehldau improvises “Ostinato,” an exercise in determination. He finishes with “Prayer for Healing,” bathing the album’s closing minutes in peacefulness.