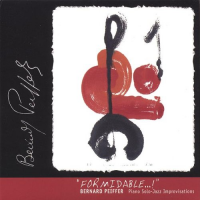 slideshow
I last posted about pianist Bernard Peiffer in August 2015. Back then, I explored his early recordings. Today, I want to turn your attention to Formidable!, an album of solo piano pieces by Peiffer recorded in 1970 in Philadelphia. The private recordings were released by Peiffer's estate in 2006 on CD. They are among Peiffer's last known recordings before his death in 1976. The sound and inventiveness are exquisite.

The tapes were discovered by Stephan Jean-Bernard Peiffer in his mother's basement after her death in 2000. The tapes had been packed away for 25 years and were encrusted in dirt and mold. Stephan enlisted the help of Don Glanden, one of Peiffer's students and a professor at the University of the Arts in Philadelphia. Painstaking steps were taken to transfer the audio over to a digital platform where the sound could be restored. In addition, the tapes included solo performances by Peiffer that Don recorded around Philadelphia.

To my ear, these are Peiffer's finest recordings. He was completely free to play as he pleased, crafting large-scale works of improvisation in thick layers. As you'll hear, his technique was so masterful that it often sounds as if two pianists were playing at once.

JazzWax clip: Here's All the Things You Are from Formidable!...