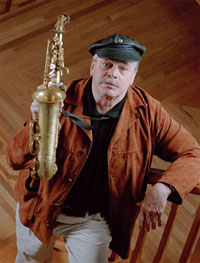 How do you give wobbly knees to 300 strong?

Aside from using a metaphor, you put a legendary alto saxophonist in front of a kickass big band and let them wail.

At least, that’s the evidence provided at last Saturday’s (July 28) headline event of the second annual Berkshire Gateway Jazz Weekend. The participants: 4-time Grammy winner and NEA Jazz Master Phil Woods; the 16-piece big band of drummer Greg Caputo; and a book that comprises some of the top music of the big bands plus 5 new compositions by Woods.

It’s a sure-fire formula, as the 300 onlookers at Lee’s First Congregational Church will attest.

The Caputo-Woods pairing was the pinnacle event of the 4-day festival, which included a magnificent set by Freddie Bryant and Kaleidoscope; al fresco jazz played by three different bands over the course of the event; a gallery-in-the-alley art show sponsored by the Good Purpose Gallery, complete with an artist’s reception that included yet another jazz group; and a closing jazz brunch that had people sitting on every possible surface while consuming both the sounds and crepes at the Starving Artist Café.

And considerable informal discussion at Moe’s tavern after each soiree.

The event kicked off on July 25 with a free screening of the Phil Woods bio-pic, A Life in E Flat, provided courtesy of Graham Carter, owner of Jazzed Media, the source of countless ‘live’ recordings and a growing library of documentaries.

The film was a suitable and well-received opening to the festival, and likely made some more fans for Woods.

The brain-child of Richard Vinette, former director of Lee’s Community Development Corp. and a co-production of Berkshires Jazz, Inc. and Berkshire Gateway Preservation, Inc., the weekend brought tourists and locals to downtown in impressive numbers, as they populated lunch and dinner spots and stores. The same T-shirts and ballcaps could be seen wandering the town for 10+ hours on concert days, just what the organizers had in mind.

As for musical highlights, it’s hard to get Greg Caputo’s drum solo on Buddy Rich’s “Nutville” out of one’s head. It brought the Saturday crowd to its feet at the close of the first set. Caputo's book includes familiar, high-energy selections ranging from Chick Webb to Gordon Goodwin, Benny Goodman to Woody Herman. A fiery drummer and leader, Caputo was especially enthusiastic about performing with Woods, a family friend dating back to their native Springfield, Massachusetts.

The crowd of 300 strong (there, in case you were wondering how the writer was going to get back to that opening) was on its feet again for the master alto saxophonist Phil Woods, who introduced five new works that are on a forthcoming CD.

Woods’ compositional chops are as impressive as his playing, which remains as creative and articulate as ever. This is especially remarkable given that an oxygen tank is his constant companion off-stage, for a case of emphysema. His works included paeans to Hank Jones and Art Pepper, as well as three other works that should draw considerable critical and popular acclaim when his CD is released later this year. It was an unexpected treat for the audience, which only came to hear some good playing, and were delighted with a remarkable set of new writing.

They were on their feet again as Woods left the stage for the band’s final number, Caputo’s reprise of the Benny Goodman signature hit, “Sing, Sing, Sing.”

If the Caputo-Woods set was the big crowd pleaser, Freddie Bryant’s Kaleidoscope quartet was equally entertaining, both musically and emotionally, albeit at the other end of the Richter scale. Showing the influence of many ethnicities and regions, from India to Brazil, with some blues, a bolero, and a tip of the hat to Bo Diddley in between, Bryant plied three guitars, including a 12-string that occasionally sounded mystically like a sitar.

His set was taken from his most recent recording, “Live Grooves...Epic Tales.” As the word “epic” –and one song named “Passages”— implies, the selections are more like journeys than short treatments. The introspective selections, all written by Bryant including his own “Bolero,” were balanced by his “Bo Diddley,” and his audience sing-along “La, La, Ohh.”

As would be the case on the big-band night, Bryant held the audience of about 150 in the palm of his hands, with engaging discourse and melodic, insightful lines and solos.

To some ears, the engaging Bryant seemed strongest in the Brazilian element. In a way, this is somewhat ironic, in that Brazil does not appear on the list of the 50 countries where the guitarist has performed. Interesting, given that he is fresh from a tour with Eliane Elias.

In the quartet, there was ample room to showcase the considerable talents of his band, including bassist Marty Jaffe, who is on the fast track to becoming a monster player; reedman Paul Lieberman; and percussionist Willard Dyson.

If the high-profile events are the ones that will draw headlines, the more intimate ones helped establish Lee, known as “the gateway to the Berkshires,” as a place where cool things happen on a hot day. The local groups included Andy Wrba’s Berkshire Jazz Collective; Rich Vinette’s quintet; and a strolling band of top-notch local musicians headed by Andy Kelly, a pied piper in Dixieland motif. His band and Vinettes shared the stage (more accurately, a patio) for a couple of numbers and then the Dixieland Ambassadors continued to stroll around town.

The art opening on the street side of this alley, during the dinner interval, featured Steve Dietmann and the Jazzmen Band. At the Sunday closing, vibes master Gary Miller and his quartet held sway in the same gallery, which is adjacent to the Starving Artist Café, serving brunch alongside the jazz.

Having established Lee as a destination in its own right, the planners are expected to move the festival to a little earlier in the year, perhaps just after Memorial Day, when there will be less competition from other performing arts venues, and when it can help build traffic for the shoulder tourist season.

Disclosure: writer Ed Bride is on the Board of Berkshires Jazz and is a member of the festival committee.