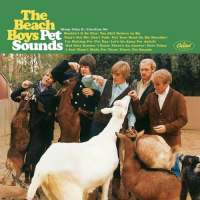 The release today of the Beach Boys' 50th anniversary remastered five-disc Pet Sounds box provides me with a perfect hook to chat a bit about one of my favorite pop-rock albums. The new set features mono and stereo version of the album plus instrumental tracks, vocal tracks, surround sound mono, stereo and stereo instrumental tracks and additional material in 5.1 surround and stereo. Why all the fuss? Because the album is one of the first to be layered this densely and when taken apart, it's like the Four Freshmen meet the Wall of Sound. You also have a finer sense of Brian Wilson's vision. Never knock a recording artist who has a clear sense of what he or she wants, no matter how eccentric.

Pet Sounds, of course, was first released on May 16, 1966 and was the Beach Boys' first concept album, coming in the wake of the Beatles' folk-rock Rubber Soul, released in December 1965. Pet Sounds had a direct influence on the Beatles' Sgt. Pepper. The Beach Boys' aborted Smile also may have swayed George Martin and the Fab Four if they heard tapes.

I own virtually every version of Pet Sounds released by Capitol. My fascination with the album isn't mawkish nostalgia for my youth or days at the beach. I didn't own the album as a kid and I was too young to surf or even know what that was. I simply love the vocal layering and instrumental textures as well as the melodies and thematic vulnerability.

This new set exceeds earlier releases in audio quality, particularly the last in-depth album box—The Beach Boys: The Pet Sounds Sessions Produced by Brian Wilson, a four-disc box released in 1997. Through the new release, you get to hear in vivid audio exactly how this masterpiece was assembled, track to track, featuring studio direction by Brian to a room filled to the wall with members of the Wrecking Crew.

Among the previously unreleased material included in the box are 11 live concert tracks of the Beach Boys performing Pet Sounds material, a maser track of Good Vibrations with partial vocal and alternate mix of I Know There's an Answer. Overall, the new set has a warmer remastering with greater sonic depth. With all of the new studio technology that has surfaced over the past 20 years, producer Mark Linett has been able to give the material a richer sound that now wraps around you. Beach Boys fans will be very happy.