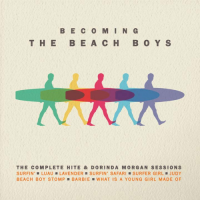 At the dawn of the 1960s, the Beach Boys were a teenage vocal group who bridged elements of West Coast jazz with California pop rock. The fusion wasn't a calculated plan as much it was the result of happenstance. The five singer-musicians had long admired the Four Freshmen and other vocal-harmony groups but were looking for a way update the sound with contemporary songs that would appeal to friends.

When the three Wilson brothers formed the group with cousin Mike Love and friend Al Jardine, they set out to frame their songs with a jazz-pop vocal-harmony approach. Then one day, Dennis Wilson came back from the beach and told the others that surfing was trending. Songs were written by Brian and Mike that combined the new craze with a Four Freshmen-like harmony and rock instruments that Brian arranged.

Let's jump ahead for a moment. On May 24, 1962, the Beach Boys signed a seven-year contract with Capitol Records, becoming the first rock group signed to the label. Why did Capitol sign the quintet for such a long period of time? The answer can be found on a terrific new two-CD set—Becoming the Beach Boys: The Complete Hite and Dorinda Morgan Sessions (Omnivore).

In 1961, the Morgans ran a Los Angeles recording studio on Melrose Blvd. When the three Wilsons, Love and Jardine showed up in October 1961 as the Pendletones and sang a cover of Sloop John B, a song recorded in '58 by the Kingston Trio, Hite Morgan passed and insisted on an original. The quintet happened to have one based on the beach trend spotted by Dennis. They recorded a demo of Surfin', and Dorinda Hite flipped. The Hites agreed to help turn the demo into a record.

A month later, when Surfin' was released on the local Candix Records, the group was listed as “Beach Boys," a name Russ Regan, the label's promotion executive, had come up with to match the song's theme. Weeks after its release, Surfin' became something of a sensation in Los Angeles, selling 40,000 copies and reaching #75 on Billboard's pop chart—remarkable for a regional label. (The band would, of course, record the song again at Capitol.)

A handful of new singles recorded at the Hites' studio followed, including Surfin' Safari, Surfer Girl, Judy and Beach Boy Stomp. A reel was assembled in April 1962, and by May, the Beach Boys were Capitol recording artists, roughly a year and a half before the label began releasing records by a group called the Beatles, who in June '62 had recorded for the first time for EMI, Capitol's parent company.

These pre-Capitol recordings by the Beach Boys are a fascinating document. There are only nine songs on the two CDs, but we hear multiple takes of each one as the group keeps polishing the song until they get it right. The CD reflects Brian's early musical vision as well as Love's lyrics.

If you love the Beach Boys, this set captures an innocent moment in time after the culture had begun shifting away from traditional adult pop and before the Beatles arrived in the States and the two bands began competing.

JazzWax clip: Here's Lavender, a song written by Dorinda Morgan, with vocals arranged by Brian Wilson and recorded by the Beach Boys in the style of the Four Freshmen. I emailed the track to a few friends, who had no clue who the group was but were convinced it was an early Four Freshmen outtake...